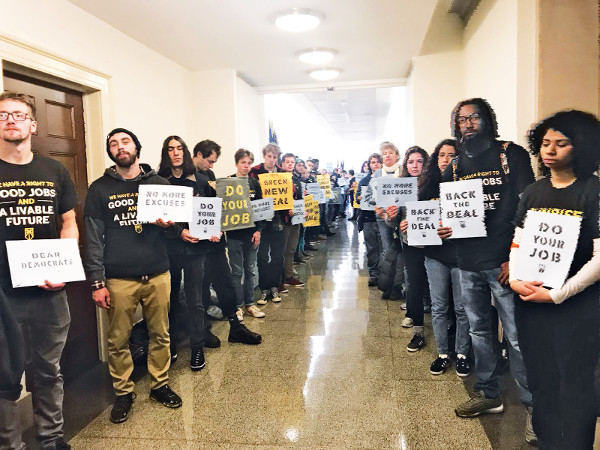 Over 1000 young people sitting in at Democratic House leadership offices demanding they back a Green New Deal before holiday recess.
PHOTO/SUNRISE MOVEMENT

Behind the recent stepped-up grassroots electoral activity and the election of representatives to Congress like Alexandria Ocasio-Cortez, Ilhan Omar, Rashida Tlaib, and Ayanna Pressley, who are grounded in working-class battles for necessities like a living wage and clean water and air, it is the youth who have been organizing to make climate change an urgent priority across America.

Sunrise is one such organization on a mission to stop climate change and create millions of good jobs in the process. (View their mission statement and plan at www.sunrisemovement.org.)

On November 13, Alexandria Ocasio-Cortez joined 200 youth from Sunrise in a sit-in at Nancy Pelosi’s office demanding Democratic leadership develop a real climate plan now that Democrats have control of the House. Below is their press release for the action.

“We have 12 years to transform our economy and society to stop climate change. Democrats must put forward a plan to protect our planet, our communities, and our economy. Nancy Pelosi and the Democratic leaders in Congress have the power to create one.

“But recent developments show the Democratic Party leadership has no intention of fighting for a real climate plan in the new Congress. The leadership’s position is tantamount to climate denial.

“The science is undisputed, we have the technology, and the public is overwhelmingly [78%] on the side of bold action on climate and jobs—the only thing standing in the way of a livable future is the failure of political leadership.

“Add your voice to ours. Tell Nancy Pelosi and the Democratic Leadership:

“1. Champion a Green New Deal that would create millions of good-paying jobs to transform society over the next decade to stop climate change. This means creating a committee tasked specifically to write policy on creating jobs and moving our country off fossil fuels over the designated 12 years the IPCC [Intergovernmental Panel on Climate Change] has given us. Let’s protect the lives of all working people—black, brown, and white—from the ravages of disaster and pollution.

“2. Mandate that any Democrat in leadership must take the No Fossil Fuel Money Pledge and reject campaign contributions from fossil fuel executives and lobbyists and prioritize the health of people and planet over industry profits.”

“We’re not expecting miracles—we understand that the GOP is corrupted by dirty oil money and will stall us at every turn. We know that sweeping change isn’t possible until Trump is gone—but we need to start laying the groundwork and put forward our vision for America now.

“We’re asking Democrats to step up to the fight alongside us. And if they’re unwilling, they should step aside and make way for new leadership that will.”

Alexandria Ocasio-Cortez suggests we pay for the Green New Deal by cutting the $717 billion military budget. This is a plan the youth believe can unite communities across historical lines of division.