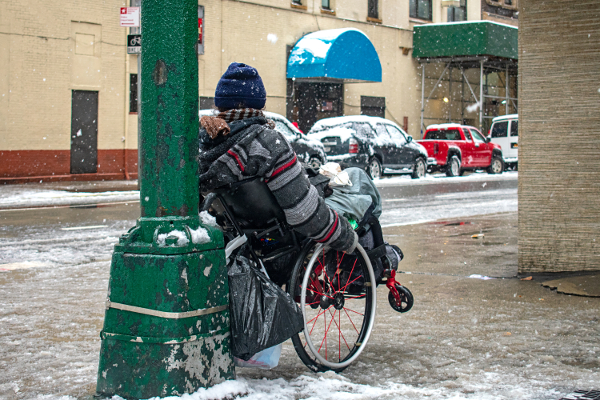 Government wants billions for a wall while people are freezing in the streets.
PHOTO/SHUTTERSTOCK

While the president chased after his wall, the real national emergency was people dying in extreme weather.

It was noon one recent Saturday in Northern Michigan, and temperatures were 30 degrees below zero.

Winter storm warnings were blaring about the necessity of staying indoors, with dire reminders of the lethal consequences for being outside. People had 10 minutes at best before frostbite set in, they warned.

I logged onto Facebook and saw many posts reminding folks to bring pets inside — “if you’re cold, they’re cold.” I love animals, but I couldn’t help remembering that an awful lot of humans needed shelter too.

I decided to conduct an informal study to see what it would be like to find shelter in Traverse City, Michigan, a largely white and affluent town near my own.

I’ve known what it’s like to be without a home of my own, and I’ve seen others I love struggle with chronic homelessness. Several years ago, a woman I loved died alone in her Traverse City storage locker.

With her on my mind, I called the permanent homeless shelter there and was informed that there were no openings. They had a “very, very long waiting list,” the receptionist told me. She didn’t take my contact information.

When I asked for other options, she told me there was a warming shelter that opened at 6:00 pm. Was the shelter going to make people stand outside before they opened, like they usually do? She didn’t know.

A warming shelter is where folks go to get away from extreme weather. Sometimes folks can stay the night, depending upon the situation and shelter. I tried to call the warming shelter multiple times, but no one answered.

I shared my story on Facebook, which caused others to look into it, too. One friend found a link online about a 211 emergency number which gave referrals to local resources.

I called 211. The operator referred me back to the same options that I’d already tried. After putting me on hold, she asked if “my person” — the one I said I was seeking help for — attended church. If so, perhaps their church would help?

“He is not a church goer,” I replied. Were there other options? She said no — and added that she “was not surprised.”

Some local friends then referred me to two churches that “help the homeless.” After a lengthy internet search for their phone numbers, I called the churches. No one answered.

My experiment was a flop. It became very easy to see how people freeze to death in these storms. Since then, there have been at least 21 storm-related deaths across the Midwest due to these record low temperatures, conditions most likely due to climate change.

In the meantime, the government shutdown reminded us how precarious housing can be for people at risk of losing their jobs, income, or housing vouchers.

Homelessness is difficult to measure — the official calculation is skewed toward a very limited definition — but activists report seeing record high rates of homelessness, especially in certain parts of the country. As one example, according to some estimates one out of four community college students in California are without stable housing.

The current administration is obsessed with building a wall to “protect” Americans from immigrants. But what’s really killing many of us is homelessness, opioid addiction, poverty, and a lack of healthcare. That’s our real national emergency.

It’s time for all of this to change. There’s no reason why anyone should die in the United States because it’s too hard to find shelter — especially from extreme weather conditions accelerated by climate change.

Kimberly Brown, retired educator from Flint, Michigan, had this to say: “The poor do not deserve to be marginalized…the mass extinctions and our own peril as a species are connected.”

If we don’t do more to help each other, and the earth, we are indeed at peril.