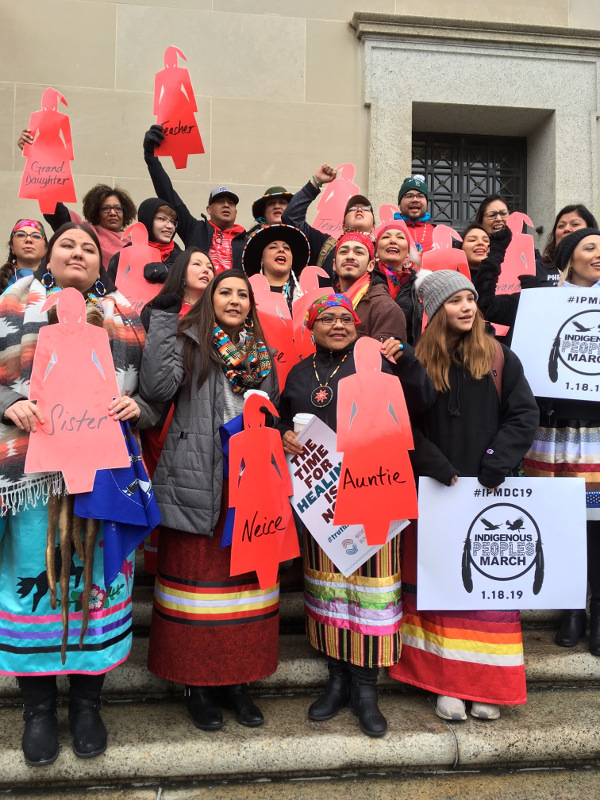 Marchers from the Missing and Murdered Indigenous Women Movement lifting up the names of loved ones lost to violence.
PHOTO/DIANA BEREK

Friday, January 18, 2019, marked the First Indigenous Peoples March in Washington D.C. Beginning in prayer and ending in a traditional round dance, the marchers sang “We are still here.” The mission of the march was to connect deeply in tradition and call for the elimination of the social, economic and political borders, injustices, and continuing genocide that unite the struggles of Indigenous People around the planet.

“We are uniting the Indigenous peoples across the World to stand together to bring awareness to the injustices affecting Indigenous men, women and children,” reads the description on the official Facebook event for the march. “Indigenous people from North, Central and South America, Oceania, Asia, Africa and the Caribbean are a target of genocide. Currently, many Indigenous people are victims of voter suppression, divided families by walls and borders, an environmental holocaust, sex and human trafficking, and police/military brutality with few or no resources and little awareness of this injustice. We Must Unite and Help!”

Connecting in celebration, while also affirming continued advocacy of basic human rights, the Indigenous Peoples Movement (IPM) demands respect for treaty rights and for the return of honor for the earth. The celebrations that were a part of this historic action are testament to the resilience and strength of the marchers and the nations they represented.

On January 23rd, the IPM released a statement which is excerpted here (The full statement as well as additional statements/media releases and photos can be found at: indigenouspeoplesmovement.com)

“Our collective thought, kinship and desire to bring peace through our traditional ways was profoundly demonstrated that day to thousands of people in D.C. and millions of people globally.

“One of the displays of our strength and culture has ended up capturing the attention of the world.

“Elder Nathan Phillips alongside Quese IMC were seen interjecting into a hostile situation. Nathan Phillips used the drum, and the gift of prayer song to defuse the situation—the same way indigenous people always have.

“The misunderstanding of our practices, respective cultures, alongside the fetishization, lumping and misrepresentation have escalated this out of context. We wanted to have the ability to set the platform. To give ourselves space to pass on education, in a way that gives us the room to show where we have come from, and where we presently are.

“On Sunday, January 20th, 2019 we honored Nathan Phillips and Quese IMC, not only for showing their resilience, but their strength and attachment to their sacred practices.

“Nathan Phillips was given gifts, within traditions and ceremony that have existed in indigenous communities for lifetimes before us, and will continue to exist for the next generations.

“We are reclaiming our place, our practices and our rights. We are on a long road to our liberation, but we will continue to support ALL indigenous peoples as they fight to create space.”