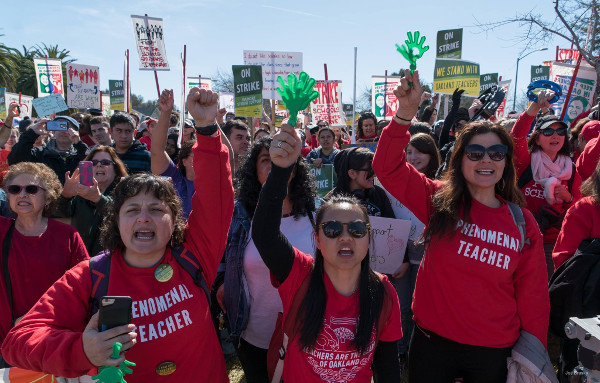 Editor’s note: Below are excerpts are from a speech by Professor Kimberly King that was given at a forum on Oakland public schools at Laney College.

OAKLAND, CA – Oakland’s regular public schools lose $57 million a year to charter schools. If this money was kept in the district, it could be used to reduce class size and end the current threat of bankruptcy.

At the same time, the Oakland School Board members, whose electoral campaigns were largely funded by the charter school industry and billionaires, stated they may close 24 public schools to deal with their financial crisis. Imagine if you were a child or parent and your school was suddenly closed. How disruptive and unstable that is! How bad for child development and for education!

The School Board says it is closing schools to save money. But an extensive study of public school closures, conducted by the National Education Policy Center, found that closing schools in urban communities does NOT save money and causes the greatest harm to the lowest income students.

A 2012 audit of Washington, D.C.’s closure of 23 schools found that the cost of the closures was $39 million, four times what the district was expected to save. When Oakland schools close, the school district estimates they will lose about 20% of those children to another district and with them their per-pupil funding. In Oakland, my sources tell me that the School District did a study finding that more money would actually be lost than would be saved by the proposed closure of 24 schools, so they decided not to publish that study.

California law permits any charter school to claim empty school property. They will be re-opened as charters. Oakland currently has 16,000 housing units under construction or in the pipeline. Most are market rate, and only a tiny fraction is so-called “affordable.” All this housing is being built in the flatlands where the schools are being closed.

This is not about what the kids and families in the flatlands of Oakland need. This is a real estate deal that will benefit developers who want to restructure Oakland’s schools to make their new condos more desirable so they can make a nice profit. This is what school privatization will always do.

The “charter school movement” is a movement of billionaires to take over public schools for profit. We need a movement of people to take the schools back and make them serve the public. “Public education for the public good!” California is the world’s fifth largest economy. Its wealth can be used for its people and the housing and schools they need!

Government is responsible to protect the public. We the People must hold them accountable!