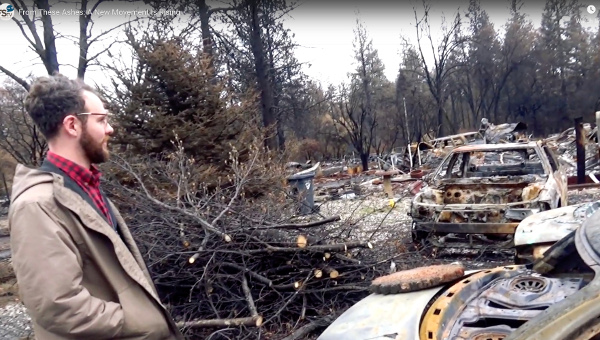 Greg Shafer, a local Poor People’s Campaign organizer says this about hardships following the Camp Fire in Northern California, “We didn’t have enough places for people to stay before the fire happened. So now we have this huge influx of elderly, poor sick folks who need a place to stay … people could die. This is about life and death.” — Excerpts are from the video, “From These Ashes a New Movement is Rising” at https://freespeech.org/stories/from-these-ashes-a-new-movement-is-rising/

CHICO, CA — Four months—yet it feels like it’s been forever since the Camp Fire ravaged the tight-knit community of Paradise, CA. The fire, which started on November 8 of 2018, practically wiped out the small town in a matter of hours. The citizens of this once bustling little town are still dealing with the aftermath. Many have had no choice but to move down the hill to the city of Chico, or pack up their belongings and move away from the North State. However, there are some who haven’t been so lucky and have been displaced indefinitely by this horrific event. In the days and weeks after the fire, tent camps popped up around Chico, one even taking place next to the Walmart parking lot. In an NPR article from February 9, 2019, the author Kirk Siegler addresses the looming issue of when residents can move back in. According to FEMA, the area is still unlivable and the debris from over 19,000 structures will take at least a year to clean up.

Currently, FEMA is investing $1.7 Billion to aid in the cleanup process. Many residents of the town were told by local officials that they could return and camp, however, health officials have recently declared the area a public health emergency. This understandably has caused some confusion amongst residents, where many have nowhere else to go. As of January, it seems that the Red Cross and Butte County officials had also closed down one of the remaining evacuation shelters at the Silver Dollar Fairgrounds in Chico, CA. They are working with the Torres Community Shelter in Chico to try and find a place for many of those displaced, according to an article by Alyssa Hodenfield of the Sacramento Bee.

As for my own experiences around Chico, I’ve seen and felt the influx of people within Chico. Many of the evacuees not only from Paradise but from neighboring communities of Magalia and Concow have moved down the hill in hopes of finding food, shelter, and other basic needs. From my perspective it seems as though many had family in the area, which they’re staying with. For those who don’t, living in cars, motorhomes, or on the streets is their only option. Many in these mountain communities were retired, so this fire has hit them harder than most. Many want to return but as of now that isn’t possible, and no one know when it will be an option. So here’s the somewhat unanswerable question: What do we do?

Well, as I stated in my previous article (peoplestribune.org/pt-news/2019/01/help-those-affected-by-the-california-fires), PG&E must be held accountable in some way. They are currently filing bankruptcy, and are looking to raise rates on ratepayers. Investing in solar is one way we can cripple the stranglehold that PG&E holds, but that is only a small way. Most of all, let your voice be heard and make it known that we need to put human back in humanitarian.