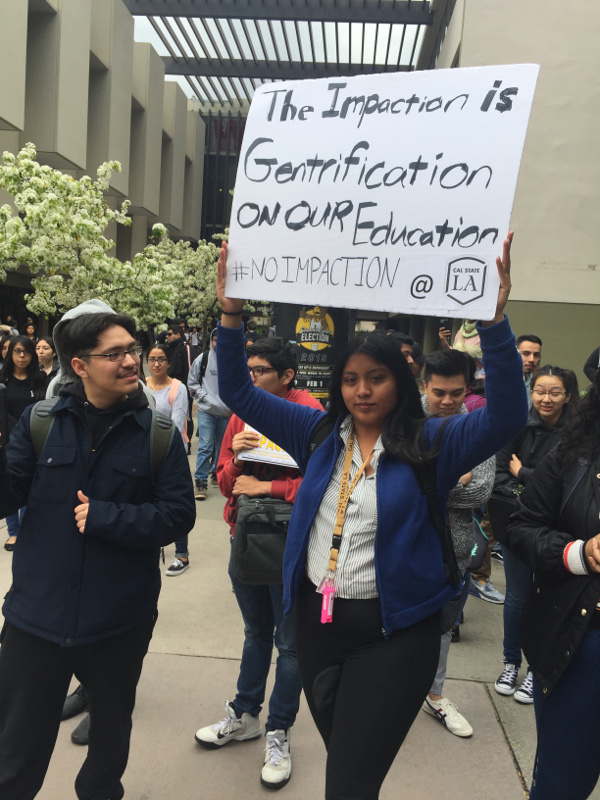 Students, faculty and staff in Los Angeles public higher education are battling corruption and a plan to lock out thousands of future students. First, the corruption: On March 11, the FBI charged 50 people with frauds by which $25 million was paid to get unqualified students into top universities across the U.S. Bankers, famous actors and prep school leaders were named in a conspiracy that focused on LA campuses. It wasn’t the city’s only college scandal. On March 6, 127 faculty from Trade-Tech demanded that the L.A. Community College District fire campus President Laurence Frank, after the District’s auditor announced that two vice presidents received $157,000 in extra income without doing any extra work.

The money came from a grant intended to help students who struggle with math courses. A staff member has told investigators she did the work for which the president authorized extra payments to Leticia Barajas, vice president for academic affairs, and Kaneesha Tarrant, vice president of student services.

Just a few miles away, Cal State LA faculty and students are seething with resentment over President William Covino’s proposal to reduce the number of students admitted each year, starting with over 600 in the plan’s first year. He wants to declare impaction. Impaction is when a public university, which did not receive enough State funding to cover population growth, is allowed to raise admissions requirements so that fewer applicants qualify. Impaction town halls were held at Pasadena City College, Cal State LA, and East LA College in February, with the Cal State LA event attracting so many people that it was streamed to a second meeting hall.

Things began with Professor Carlos Tejeda insisting that the administration not speak but first listen to why this was more than a matter of budgets and numbers. “I have been teaching here 20 years, I am a working class special admit” he declared, “a reality you do not understand. Listen to the people who do” he insisted, to loud applause.

Walter Rodriguez, an Iraq vet whose PTSD hurt his son’s high school studying, said that under the higher impaction standards his son would not be admitted, despite the family’s sacrifice. Antoinette Saddler, a Pan African Studies major, pointed out that LA’s Blacks already suffered an impaction, because “In 2016 we were almost 5%, today we’re only 2%” of the students. Danielle Mayen was admitted under EOP’s Special Admissions program, and is now an effective student and a leader. She said her vision was for people like her “to come after me and have the same opportunities that I did.”

The scheduled 1½ hours became almost 4 hours, until the building had to be closed. In all that time, not one person supported impaction. But administrators later announced that their plan would proceed, ignoring speakers who had called for building a united struggle to pull sufficient funding from the Democratic governor and legislature.

Go to www.notoimpaction.com to read the statement signed by over 100 faculty and staff and letters from community groups and unions. Video footage of the public meetings at East LA College and at Cal State LA are on Youtube at: impactionhearingelac.

Steve Teixeira is on the staff at Cal State LA, does social justice and union work, and as a student fought to create ethnic studies and EOP.