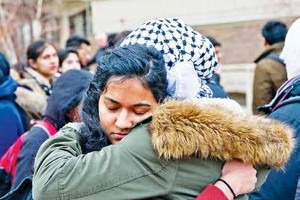 People at the Chicago Memorial Service for the 51 Muslim victims of the massacre in New Zealand express their unity against hate. “Speeches condemning the attack, and of courage, strength, and resolve in the face of persecution were given. The names of the victims were read off one-by-one. Rest in power in paradise. And then prayers and the planting of a tree as a symbol of everlasting life,” said Charles E. Miller, the photographer of this photo. Throughout the country, the American people are expressing their moral outrage at the slaughter of people, regardless of religion, nationality, sex or country. This is a step toward the unity needed to create a peaceful, prosperous society for each and every one of us. – The Editors