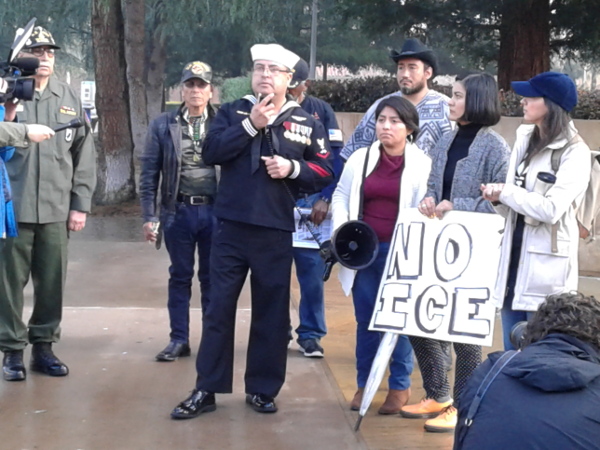 MERCED, CA — Joaquin Sotelo Tarin of Merced County, a decorated U.S. Naval veteran of the Iraq, Kuwait, and Afghanistan campaigns of 2001 to 2006, narrowly avoided deportation on Valentine’s Day, 2019. Surrounded by wife and family, and numerous supporters in Merced, California, a decision was made to remove an ‘aggravated felony’ charge, which would have allowed ICE to deport him, despite having served sentences in jail and ICE detention.

200 to 350 Latino U.S. veterans in Tijuana were not so lucky, having already been deported. Many feel that if those who have risked their lives for this country can be so cruelly treated, that the deportation machine of ICE and our federal government will show no mercy for any immigrants at all. Hector Barajas, a veteran who was deported for over two years to Tijuana knows full well this story (See People’s Tribune June, 2018). A naturalized citizen now, he obtained help for Joaquin that was instrumental in his success.

Joaquin, suffering from Post Traumatic Stress Disorder (PTSD) after having been honorably discharged, succumbed to the vicious cycle of alcohol, drugs, domestic violence, and homelessness—a fate that has befallen so many veterans, whether U.S. citizens or legal permanent residents like Joaquin.

As a non-citizen, he did not receive the VA attention he so sorely needed. To make matters worse, his legal defense by a court appointed attorney was lacking, opening him up to ICE deportation for plea bargaining despite his stated preference for trial by jury.

As David Alvarez, a Native American Vietnam War veteran stated in front of the ICE detention center and Senator Feinstein’s office in Fresno, California: “ … the government is trying to ‘wash’ its hands by trying to send him somewhere else…He’s a wounded veteran. We have a responsibility to heal him… They gave me intensive treatment, and I don’t think he’s gotten that.”

Joaquin’s path is now open to naturalized citizenship. He has undergone the treatment he was initially denied. Joaquin remains committed to “passing it forward.” He is getting training as a counselor so he can help other veterans suffering with PTSD. Not one more deportation!