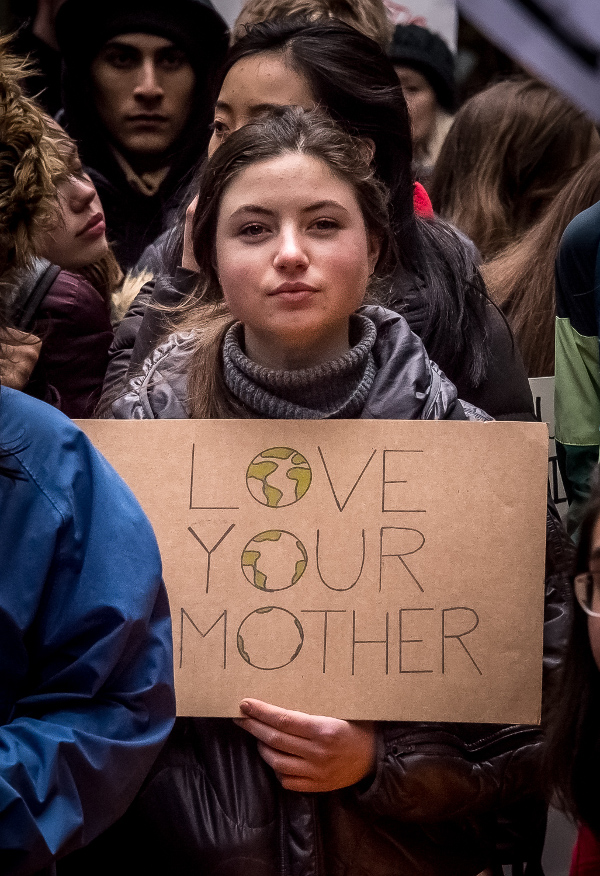 The international Youth Climate Strike, held across the country and world on March 15, demands that countries get off fossil fuels to avert climate catastrophe.
PHOTO/BRETT JELINEK, OLAFIMAGES.COM

With a sense of urgency youth are in the lead: marching, speaking out, occupying congressional offices in DC and state legislatures, and planning climate strikes around the world demanding governments adopt a plan to get off of fossil fuels in order to avert climate catastrophe. By their refusal to accept destruction of the planet in the corporate drive for profits, they are fighting for all of us.

In a youth-led court battle, Kelsey Juliana, 21, and 20 others as young as 11, are suing the U.S. government (Juliana v. United States) to stop the use of fossil fuels. “The government has known for over 50 years that burning fossil fuels would cause climate change. They don’t dispute that we are in a danger zone on climate change. And they don’t dispute that [it] is a national security threat; a threat to our economy and a threat to people’s lives and safety,” declared Kelsey.

The lawsuit claims the executive and legislative branches of government have proven incapable of dealing with climate change. It argues that the government has failed in its obligation to protect the nation’s air, water, forests and coast lines. It petitions the federal courts to intervene and force the government to come up with a plan that would wean the country off fossil fuels by the middle of this century.

After five attempts by the administration and fossil fuel corporations to get the lawsuit dismissed, the Supreme Court is allowing it be heard.

This crucial court battle comes as young Americans across the U.S. are mobilizing in support of the Green New Deal resolution. A recent survey found that 81% of registered voters when asked “how much do you support or oppose” the proposal [to generate 100 percent of the nation’s electricity from clean sources within the next 10 years, upgrade the United States’ power grid, invest in energy-efficiency and renewable technology, and provide training for jobs in the new, green economy], say they either “somewhat support” or “strongly support” the plan.

Meanwhile, oil and gas development expanded dramatically during Trump’s second year, which experts warn will have terrible consequences for the climate and the planet.

With trillions of dollars invested in fossil fuel infrastructure worldwide, the privately owned energy corporations will not give up their interests without a fight. Fossil fuel billionaires fund politicians, introduce legislation favorable to industry through organizations such as the American Legislative Exchange Council (ALEC) and Council of State Governments (CSG), and even hold key positions in government. Wars are fought and millions have died over the control of energy resources.

It will take organized political will to unseat these powerful corporate interests. Unity of the American people in the fight for public ownership and control of industries necessary for human life, such as energy, would be an unstoppable force for real democracy and for government that truly is “of, by, and for” we, the people. Our future and the future of mother earth is up to us!

‘They only care about money,’ says 11 year old climate activist