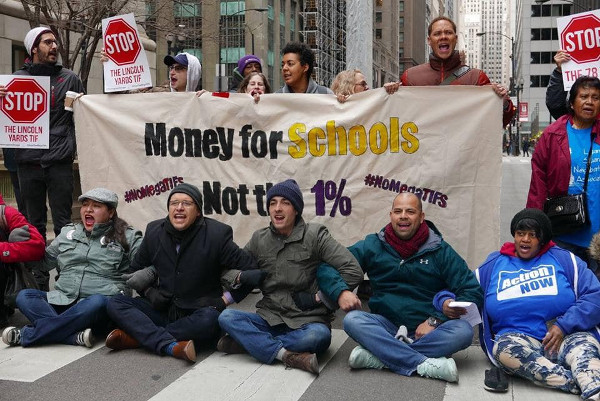 A specter haunts the ruling circles of Chicago: the specter of a working class that cannot find a job in a city where many no longer work. Only 30 percent of registered voters went to the polls, but those who voted took what they had been fighting for in their communities to the ballot box and told some of the long-entrenched incumbents to get out of town.

Altogether, among the winners in the general election and the runoff, two incumbents and eight challengers represented demands put forth by the people: housing for all, fully funded public education, defense of immigrant rights, and police accountability. Three wards were so close that a recount may be needed to decide if challengers won.

People are angry that government has betrayed them. Six socialists won their electoral battles, but this is not a battle for an abstract “socialist” idea. A life-and-death fight, carried out for the basic right to survive, propelled these candidates to victory.

Jeanette Taylor had been active in her local school councils for decades before running for office and had led a successful hunger strike to keep a neighborhood high school open. Byron Sigcho-Lopez, an educator and researcher, has fought against gentrification and exposed the corruption in the UNO Charter School network.

Talking about Sigcho’s victory in the April 2 runoff election, Pilsen Alliance Board Chair Rosa Esquivel said, “Each one of us have put our hearts in the campaign. We really believe in something. We are tired, tired of all the corruption of [former alderman] Danny Solis, tired of the displacement and the dehumanization of people.”

These struggles come out of the polarization of wealth and poverty, caused by jobs being automated out of existence forever. In this context, the legendary ability of the Democratic Party “machine” to mobilize voters is dissipating. Organizations like United Working Families (UWF), Reclaim Chicago and others are claiming the allegiance of workers. After Maria Hadden handily beat the incumbent alderman last February 26 with a program focused on schools and housing, she committed her volunteers to campaign in other key City Council runoff races.

In the mayoral runoff, two African American women faced off.

Although Lori Lightfoot has extensive Democratic party connections, she promoted herself as an outsider and won all 50 of Chicago’s wards.

She campaigned against Toni Preckwinkle, who has been a Democratic ward committeewoman since 1992 and chair of the Cook County party since April 2018. Preckwinkle also is president of the county board of elected commissioners.

The vaunted party “machine” split down the middle, with some supporting either one or the other candidate. The real story is that the machine could not bring out the vote. Even in the aldermanic elections, some incumbents outspent their challengers by more than 5 to 1 and still lost.

We won enough in this election to whet our appetite. Despite the low election turnout, signs point to a sleeping giant that is awakening. How quickly we don’t know, but direction is more important than speed.

Ten aldermen are prepared to join forces to fight for a program of the working class, but real estate and corporate interests are still in control. We especially won the responsibility to intensify the fight, as Andre Vasquez put it, “for affordable housing, for open and transparent government, and for a city that devotes its resources to its people, not the corporations, not the private developers.”