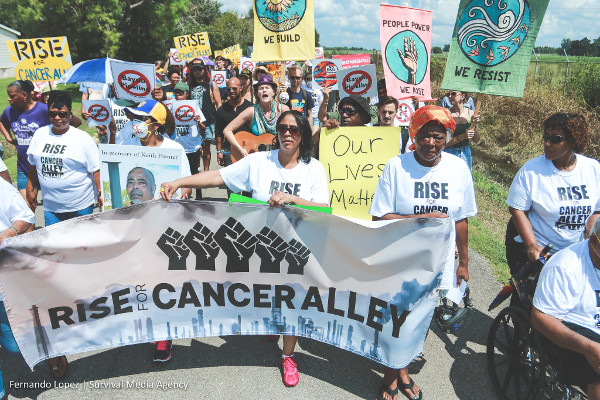 Protesters march in St James, Louisiana, on Sept. 8, 2018. St. James, part of the area known as cancer alley or death alley because of chemical pollution, is a small, predominantly black community at the end of the Bayou Bridge Pipeline.
PHOTO/FERNANDO LOPEZ, SURVIVAL MEDIA AGENCY

On these pages, the People’s Tribune brings you stories from the fighters in battle to save the Earth and humanity from corporate destruction. Please send us your story:  info@peoplestribune.org – The Editors

The People’s Tribune recently interviewed Pat Bryant and Robert Taylor, who are among those fighting environmental poisoning by the petrochemical industry in what is known as “cancer alley” or “death alley” along the Mississippi River in Louisiana. Below are excerpts from their comments. For a fuller transcript of these interviews, go to www.peoplestribune.org.

Pat Bryant, a member of the New Orleans-based civil rights group Justice and Beyond, and of the Coalition Against Death Alley:

Between Baton Rouge and New Orleans we have over 200 petrochemical companies that are permitted to put anything they want, just about, in the air, land and water. It’s a zone of national sacrifice and the regulation is so lax that companies from Japan and China and everywhere want to come here and locate on the Mississippi River, because there’s a volume of water that will take all of the effluent into the ocean and there’s so many contributors that that they would not be detected.

I have not seen a cumulative tally of what’s being put out in the air, but it’s choking. We’re killing people down here fast. There are so many funerals. We’ve been fighting against these companies for more than 30 years. And the state of Louisiana is still bringing these companies in and offering them free taxes.

The community that I live in, a little town called Reserve, there’s this DuPont Denka plant. They are bombarding our community with 29 different chemicals, which are the results of their manufacturing processes. The number one chemical at issue is chloroprene.

We have an elementary school about 1500 feet from the plant, and those children are regularly exposed to 300 to 400 times what the EPA has established as a safe level of exposure for human beings. And it has gone as high as 500 or 600 in what they call peaks.

According to the EPA, in the census tract that I live in, we’re at a 1500 times greater risk than the national average for cancer. And the government is allowing that to go on. To me, that is plainly genocidal. Reserve is going to be wiped out, and it’s a largely black, poor community. Fifteen hundred times the national average—that is ungodly and inhuman. Is that really America? Is that the way America feels about its citizens?

I think that our Coalition Against Death Alley (CADA) is going to be effective because it’s uniting all of the communities up and down the river. We want to unite all of them in Louisiana, and eventually all of the poor, disadvantaged people. We want to unite all of these people all over the country. We have to get them to understand that as the group that is designated as expendable, we need to come together, and put aside any petty differences. And that’s not just black people, because there are poor white communities right here in Louisiana that are suffering the same thing. We are going to fight for our rights to life and liberty and to be able to breathe fresh air, for our children to have a chance to live.

Editor’s note: CADA will hold a march May 30-June 3 from Reserve to the state capitol at Baton Rouge. For more information, see the Coalition Against Death Alley Facebook page.