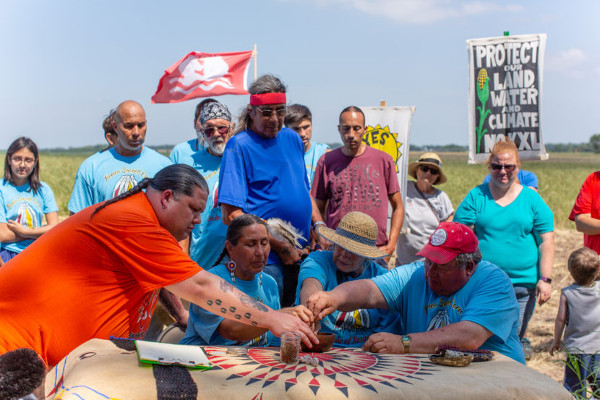 Nebraska farmers Helen and Art Tanderup sign a deed gifting a piece of their land back to the Ponca Tribe, alongside Ponca Tribe of Nebraska Chairman Larry Wright, Jr., and Ponca Nation of Oklahoma Councilwoman Casey Camp-Horinek. The gifted land lies both on the historic Ponca “Trail of Tears,” and the route of the proposed Keystone XL pipeline, which they all are fighting.
PHOTO/ALEX MATZKE, BOLD NEBRASKA

“You think we live in a democracy? The federal government will not protect you.”

“I’m angry because I feel that private citizens no longer have rights; the country is now controlled by big business.”

“They are taking our renewable natural resources and allowing a few private investors to sell it for their own private profit—risking our water, land, erosion potential, the health and safety of people that live along the pipeline path; all this so a few guys can make a buck.”

These are the bold statements of common people—pipeline fighters—taking a stand to protect a way of life that is quickly disappearing as oil and gas pipeline corporations take people’s land through eminent domain with the aid of the federal government.

Owners have been arrested and charged with trespassing on their own land. Water protectors have been jailed for kayaking on open water near pipeline easements. Leaders have been threatened and shot at. Militarized security and sheriffs’ officers turned water http://peoplestribune.org/pt-news/2019/05/freedom-of-speech-and-the-assange-arrest/cannons on protestors at Standing Rock, also using rubber bullets and concussion grenades, nearly tearing the arm off one young woman.

Another pipeline fighter asks, “Is this the American dream, is this what I grew up paying taxes to support? Is this the future of this country—that the average American doesn’t count at all, that it only matters if you have pull on Wall Street and pull in Congress and pull at the state level? What’s going on, who’s minding the store? This means we’re not in control.” 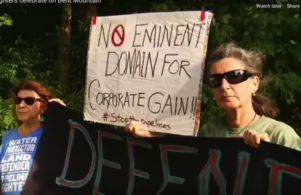 Pipelines being constructed to carry these volatile fuels from points of origin to coastal refineries and ports, such as the Keystone Pipeline System (including Keystone XL) owned by TransCanada Corporation, running from Alberta, Canada to Illinois, Texas, and Oklahoma; the Dakota Access Pipeline, that will cross four states from North Dakota, to Patoka, in southern Illinois, crossing beneath the Missouri and Mississippi Rivers, as well as under part of Lake Oahe near the Standing Rock Indian Reservation; the Enbridge Line 3 from Alberta, Canada, through the ancestral homelands of the Anishinaabe people, the lakes and rivers of northern Minnesota, to Superior, Wisconsin, crossing more than 190 bodies of water, jeopardizing the means of survival of the Ojibwe people; the Bayou Bridge Pipeline in Louisiana; and the Mountain Valley and Atlantic Coastal Pipelines and other proposed lines through West Virginia, Virginia, Ohio, Pennsylvania and New York are being challenged by farmers, ranchers, indigenous tribes and even nuns whose land is being taken by eminent domain with or without consent by pipeline companies with the blessing of the courts.

The people are demanding to be heard. They’re demanding construction be stopped. They want renewable energy technologies. And they’re organizing. As one fighter said, “The people of this land are standing up to big corporations, standing shoulder to shoulder, despite differences and everything else they use to divide us.”

The fight is now over who the government is going to serve. Will we, the people have a government that protects the environment, water, and our way of life through democratic means, or will we have government dictated by for-profit corporations which sacrifice all life for their private gain? We must demand that every politician answer to the people the question, “Which side are you on?”