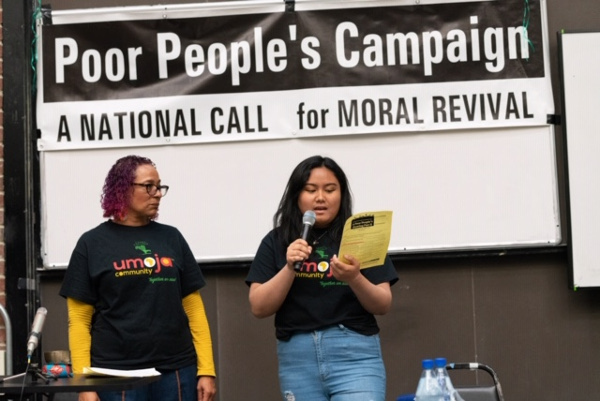 An estimated 200 people heard testimonies from people in fear of not making ends meet, and a discussion of solutions to poverty and homelessness in Oakland, CA, as part of the Poor People’s Campaign.
PHOTO/MICHELLE SNIDER

Editor’s note: Austin Long-Scott is a retired journalist and professor.

OAKLAND, CA — A homeless technology worker living in his van in a parking lot. A 17-year-old high school student afraid climate change won’t let her live to have children of her own. A husband snatched by Immigration and Customs Enforcement (ICE), leaving his wife and 4 children without income. A demand to outlaw landlords and make housing free.

Those were just a few of the painful travesties described at an April 17 “Poor People’s Hearing” sponsored in the shadow of Silicon Valley’s billionaires by the Laney College chapter of the new Poor People’s Campaign in rapidly gentrifying Oakland, CA. The hearing explored “Housing Education & Healthcare For All with solutions for Poverty and Homelessness.”

An audience estimated at 200 heard there are 4,000 homeless students at San Jose State University. A spring 2017 survey found 51.2% of the responding students in the Peralta system of 4 Bay Area community colleges were housing insecure, and 30.2% said they were homeless. People testified they lived in constant fear of not making ends meet because “the state continually decides that our lives are not a priority.” Students said their ability to learn was being hurt.

Audience members were invited to line up at microphones to share stories of their lives. 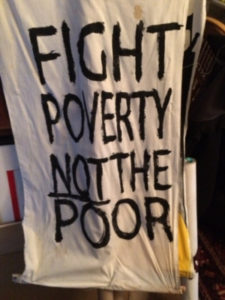 Student Amy Marshall said her decision to become the caretaker for her mother in declining health means she needs a job that will allow her to come and go, and that dramatically limits her choices and her income. “As an Uber driver I am one catastrophe away from going back to being homeless,” she said.

Robert Aguirre was homeless twice, once when he was unfairly displaced from an apartment and again when San Jose demolished its largest homeless camp while he lived there. Aguirre asked the audience in the back half of the large auditorium to stand up and move to the front to fill in vacant seats. As people scrambled in confusion, unsure whether to obey, and whether to carry their cell phones and other belongings with them or secure them safely in place, Robert told them they were experiencing what it’s like to be rousted from housing. You don’t have housing, he said, but you carry home with you, “home is wherever you are.”

One day I hope to travel the world and see new places that I never thought existed,” said high school senior Dulce Arias, 17, with Youth Vs. Apocalypse. “I want to live long enough to have children of my own and watch them grow, In 2030 I don’t want to wear a gas mask when I step out of the door and most of all I do not want anymore people to suffer from things that can be avoided.”

This country was not about the people,” said John Jones. “It was about property, maintaining private property.” Private property, as opposed to personal property, is the ability of individuals to own and profit from an important means of production. “The basis of poverty is all about keeping wealth in the hands of a few. There is only one place in America where you are guaranteed a roof over your head, and that’s in prison.”

We have a capitalist crisis, a system crisis, not a crisis of the people,” said teacher Alicia Caballero.

Ethel Long-Scott of the Women’s Economic Agenda Project quoted one of the 12 “Fundamental Principles” of the new Poor People’s Campaign, being organized in 40 states: “We believe that people should not live in or die from poverty in the richest nation ever to exist. Blaming the poor and claiming that the United States does not have an abundance of resources to overcome poverty are false narratives used to perpetuate economic exploitation, exclusion, and deep inequality.”

Prof. Kimberly King said 68% of the estimated 3,000 homeless living on Oakland’s streets are black while only 28% of Oakland residents are African American. “Why is Trump saying there’s a national emergency on the border and not noticing there’s a national emergency in our cities? The government should guarantee housing and a stable life for everyone.”

We have seen that the Industrial Revolution which produced so many good jobs and strong labor unions in the 20th Century is almost dead,” Long-Scott said. “We have seen that its replacement, globalization coupled with the digital revolution – robots replacing workers – has changed the way power politics is being played. Workplaces as we have known them are disappearing. Corporations are getting richer and richer with fewer and fewer workers. Elected public officials are increasingly throwing their lot in with what global corporations want, rather than what workers need. This includes stripping entire populations of their democratic rights.”

Sandy Perry, a minister to the homeless in San Jose, described the fight for rent control going on in San Jose as a defensive battle. “We need to go on the offensive for the kind of world we want to build,” he said. “Landlords should be outlawed and housing should be free.”

Many who testified talked about the steady disappearance of good jobs and the housing crisis for long-term residents caused by global corporations buying up blocks of homes, and builders flooding in to put up expensive high-rise condo projects.

We want a quality life for our children, said Rachel Harralson from Parent Voices Oakland. “We want safety. We want security. We want the same things Google wants.”

A retired journalist who reported on Dr. King’s Poor People’s Campaign told the hearing of the 3,000 plywood huts that 1968 protest against poverty set up on the National Mall in Washington D.C., right in front of the Lincoln Memorial.

Poor people from all over the country came to camp out there for six weeks, and I was there reporting,” he said. “Who knew that encampment would anticipate Oakland’s Tuff Sheds and be the forerunner of thousands of tent encampments in cities all over the country today? The point is that in my entire lifetime, none of the people who run this country have been serious about ending poverty. They just run poor people from one phony promise to another. In 1965, when the late President Lyndon Johnson promised a “War On Poverty” there were 35 million Americans classified as poor. Today there are officially 43 million who are poor, 100 million if you count the near poor . . . Today it is time for the dispossessed to unite in stopping this shoveling of misery on people who dare to dream . . . Every generation of Americans invents new tools to make sure some groups of people will enjoy comfort, wealth and power at the expense of other groups of people who will be fighting misery on many fronts.”

Our city leaders partnered with developers to create 16,000 market rate housing units and not spit for housing for the poor,” a visibly angry Long-Scott almost shouted. “Only tent cities and encampments. Corporations won’t house the poor and government is failing the people . . . Ending Poverty and Inequality means, like the People’s Tribune says, that across the nation we see the direct connection between corporations, developers, rising rents, the soaring cost of housing everywhere and the rise of homelessness and people living on the streets, or in their cars, or couch surfing. Central cities are being redeveloped for the wealthy as affordable rents disappear and people are driven out of jobs, housing, and into homelessness.”

This was the second Poor People’s Campaign in April in Oakland. The first, April 6, at Taylor Memorial United Methodist Church, drew as many people and equally agonizing testimony. Oakland is ground zero for a series of gentrification waves pulsing out of Silicon Valley as it mints millionaires and washing away poorer residents with a force that might as well be a tsunami.

One result is a local intensification of the national push to generate private profits by privatizing public resources. The Oakland public school district is currently proposing to close 24 of the city’s elementary and middle schools, all of the city’s lower income flatlands neighborhoods. Schools in the higher income hills neighborhoods are being spared.

Public higher education is also being threatened. The Peralta District of community colleges is seriously underfunded, under maintained and under supplied. Laney College managed to fight off an attempt by the Oakland A’s last year to take some of its land for a new stadium, but there are other threats on the horizon.

The new Poor People’s Campaign, co-chaired by the Rev. William J. Barber and the Rev. Liz Theoharris, is holding hearings nationwide to lift the voices of the disenfranchised and dispossessed in America as part of a national call for a moral revival. Rev. Barber has said he is picking up where Dr. Martin Luther King left off with the first Poor People’s Campaign 51 years ago in 1968. “Dr. King said the issue is not the scarcity of wealth, it’s scarcity of will,” Rev. Barber has said. “We need a movement that forces a new agenda. Mobilize 140 million poor . . . We’ve got to stop fighting each other and start fighting extremism.”

The new Poor People’s Campaign has produced a 123-page study of the causes of poverty and the misery poverty casts on the lives of the poor. The study, called “The Souls of Poor Folk,” goes into gripping detail about the shameful conditions of the new common poverty, the poverty that affects almost half the people in the country and cuts across racial, cultural, gender and other lines. It blames racism, inequality, militarism, the war economy and ecological devastation, among other factors.

The thing about common poverty today is that it is a tool of dispossession.” The retired journalist said. “These calls we hear for austerity for workers are being used to dispossess people of their ability to make a decent living, deny them the ability to take good care of their families, interfere with their ability to protect and educate their children. It is even separating people from the basic needs of life, like going hungry and going without safe water in Flint, Michigan. It is affecting people of all races, of all cultures, and it is sucking people from more and more walks of life into a downhill spiral.”