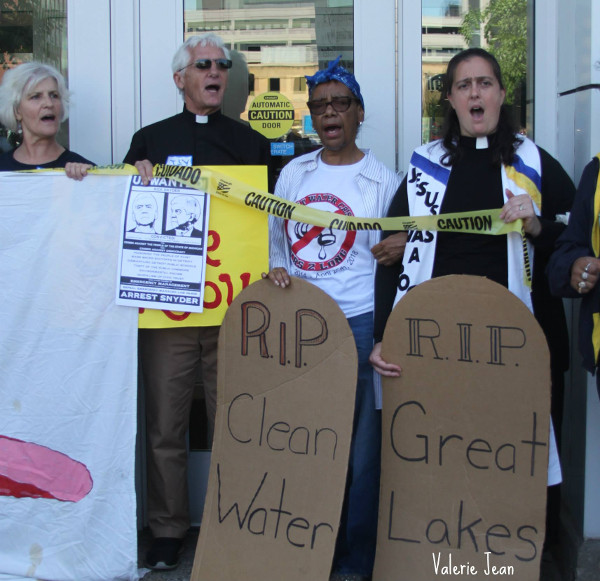 The event that triggered the arrests in front of the MDEQ in Lansing, MI, that blocked the doors to the building. (L-R) Kim Redigan, Jay Cummings, Pastor Emeritus, Claire McClinton and Rev. Liz Theoharis.
PHOTO/VALERIE JEAN

Editor’s note: Information for this story is drawn from various press releases.

“We blocked all the doors (and eventually the parking lot) of the Michigan Department of Environmental Quality (MDEQ) headquarters, plus surrounded the building with crime scene tape because of environmental concerns,” said Rev. Bill Wylie-Kellermann, one of some 30 people arrested. Concerns included the role of the MDEQ in the Flint water poisoning, oil spill threat of Enbridge’s Line 5, and permitting the expansion by US Ecology and Nestlés in the Great Lakes.

The action was part of the Poor People’s Campaign: A National Call for Moral Revival. “This contributed to the largest focused and coordinated campaign of civil disobedience in US history . . . the MDEQ needs to make public health the priority, not corporate profit,” said Wylie-Kellermann. 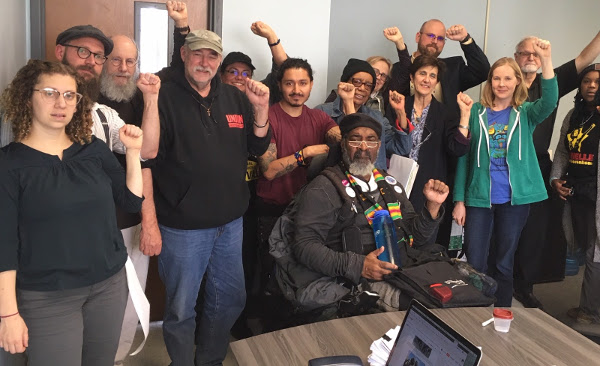 Defendants express victory after prosecutor dismisses all charges in the DEQ action.
PHOTO/FACEBOOK

Chief Judge Louise Alderson postponed the trial to June to allow sufficient time to consider the applicability of allowing a defense of ‘Justification/Necessity’. Two days later, the prosecution dismissed all charges against all defendants—rather than face the likelihood of acquittal based on ‘necessity’.

“I’m honored to have had the opportunity to practice this kind of moral leadership with such an amazing group of spiritual warriors,” said Rabbi Alana Alpert.

“To enable a tunnel under the Straits of Mackinac, a massive investment in a dirty energy past, is perverse. The solution is clear: #shutdownline5  #cleanenergyNOW!”said Reverend Deb Hansen.