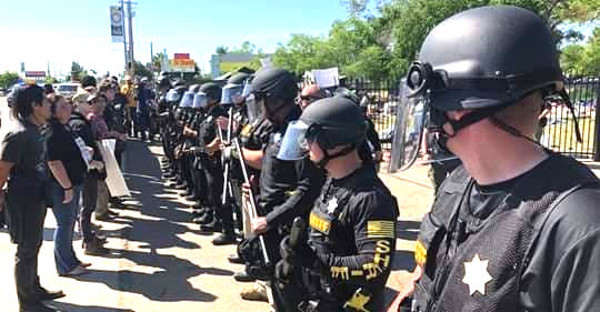 “On May 1, 2019, 145 residents of Sacramento’s Stockton Blvd Encampment, and advocates, were greeted with a raid carried out by approximately 150 militarized police in full tactical gear. One woman’s arm was broken during the raid. We had requested trash and restrooms and viable resources for months, to no avail. Our friends on the streets are relentlessly tormented by constant removal at all hours, with nowhere to go but to another street, to be again criminalized within hours. This in direct violation of the 8th Amendment in the U.S. Constitution against cruel and un- usual punishment. NO DISPLACEMENT WITHOUT PLACEMENT!” writes homeless movement activist Crystal Rose Sanchez.