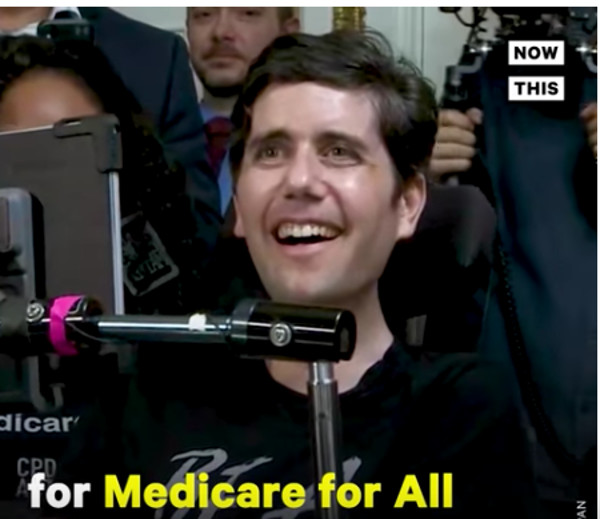 Attorney General William Barr showed his utter contempt for people like Ady Barkan (pictured above) when the Justice Department joined a lawsuit to have the Affordable Care Act (Obamacare) declared unconstitutional. In the photo above, Barkan, who has a terminal illness, speaks with a synthetic voice before the House Rules Committee hearing in support of Medicare for All on April 30. Barkan’s family has insurance but faces $9,000 a month in additional expenses for home care or he must go to a nursing home. He decries that in “the wealthiest [country] in the history of human civilization, healthcare is not treated as a human right.” Barkans said that there is a mass movement rising up insisting there is a better way to structure our society and that any insurance that maintains profit for health care will mean some people don’t get ealthcare.
PHOTO/CSPAN VIDEO STILL

On May 1, U.S. Attorney General William Barr vigorously defended his handling of the Mueller investigation in a defiant appearance before the Judiciary Committee of the U.S. Senate. His refusal to cooperate with the committee sparked outrage. It even led to calls by some Congressional representatives to have Barr cited for contempt and arrested by the sergeant at arms of the U.S. Congress. (Such an arrest has not taken place since the 1930s.)

But—as journalist Catherine Rampell pointed out in a column in the Washington Post—the worst thing that Barr did that week had nothing to do with the Mueller investigation.

On the very same day that Barr testified to that Senate committee, the federal department which Barr heads went to court to try to destroy health care for tens of millions of people.

On May 1, the Department of Justice formally asked a federal appeals court to strike down the entire Affordable Care Act—“Obamacare.” The Department submitted a brief supporting a lawsuit challenging Obamacare by the attorneys general of 20 Republican-controlled states. The lawsuit claims that the ACA is unconstitutional.

If the Trump administration prevails in this case, everything in “Obamacare” would be wiped out: Protections for people with pre-existing conditions, Medicaid expansion, provisions allowing children to remain on their parents’ insurance until age 26, requirements that insurance cover minimum essential benefits such as prescriptions and preventive care, etc.

If the ACA is ruled unconstitutional, such a decision would end health insurance for some 21 million Americans and affect many more. As partial and incomplete as the ACA is, the destruction of “Obamacare” would be a gigantic step backward.

Certainly we need more than the ACA. We need an improved and expanded Medicare for all. But while we’re fighting for Medicare for all, we should not allow the backward step of destroying the ACA. Doing this would also play into the hands of the corporations and politicians who want to squash the Medicare for All movement.

Barr’s refusal to grant Congressional representatives full access to the Mueller report showed contempt for Congress, but his department’s attempt to destroy the health care of millions of the most vulnerable is far worse.

If the sergeant of arms of the Congress is going to arrest William Barr for something, we have a suggestion. In the 1870s, there was a little room in the basement of the U.S. Capitol building in Washington where thieves arrested around the Capitol were held. Since William Barr and his colleagues are attempting to steal health care from millions, let’s have him arrested and confined in that very same room—H-159. Historical records indicate that there was very little sunlight in the room and that it was “a room that stinks, that smells like the den of some foul reptile.” Mr. Barr should feel right at home.

DID YOU KNOW: Nearly 45,000 deaths a year are associated with a lack of health insurance according to a study published in 2009. Under a publicly run Medicare for All program, everyone will get healthcare without paying premiums or added costs. There’s plenty of corporate funds to tap to help fund it.

The fight for universal healthcare in Utah