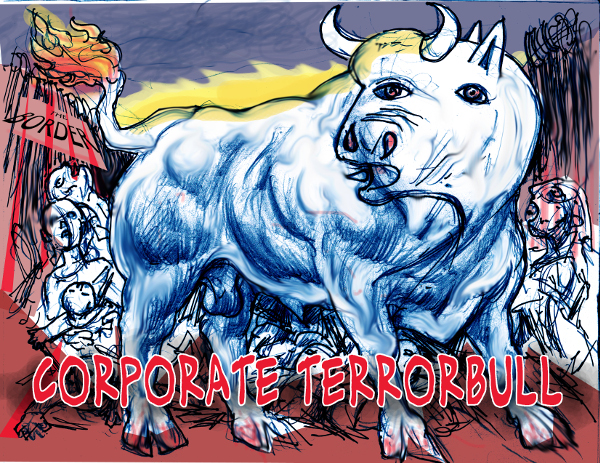 “What kind of monsters put children in cages?” reads a woman’s sign, protesting the mass forced separation of thousands of children from their parents seeking asylum at the US/Mexican border, and their incarceration in crowded, filthy, lice and disease-ridden concentration camps. According to witnesses, they are forced to sleep on concrete, are hungry, terrified and traumatized, and subjected to physical and sexual abuse. A doctor who visited one of these camps, full of sick and malnourished babies, compared it to a ‘torture facility’.

Many babies and toddlers are left in the care of also traumatized older children, who don’t know if they will ever see their parents; and their parents are living the worst nightmare, having their children ripped from their arms. Eight children have already died. The youngest of these stolen children was four months old. A mother watched in anguish her young husband and 1 year-old daughter drown trying to swim across the river into Texas.

This horrifying mass crime is being perpetrated by the Trump administration and forces around him, with many others in government complicit, although some are speaking out against this monstrosity. Many have financial interests in the private corporations that are running the camps. One of these makes $750 a night to cage, torture and starve these children.

These families are fleeing conditions of severe drought and of poverty, violence and oppression, much of the violence supported by the US government in the interests of corporate plunder, which in countries such as Honduras and many others bankrolls and trains death squads to murder anyone who organizes for their rights. Hoping to come to safety, they are met with this added terror, family separation and concentration camps.

This horror is sparking outrage all across the country, across divisions of politics and background: the separation of families and kidnapping and torture of children is appalling to anyone with a human heart! Protests and mass mobilizations are being organized.

Concentration camps are nothing new in the U.S. Native American children were forcibly taken from their families and placed into prison-like government schools. The separation of families under chattel slavery was practiced for hundreds of years; and the slave-catchers of today, the police, can shoot down an unarmed Black or brown child, or any poor or homeless person, and get away with murder. Japanese citizens were rounded up and put into concentration camps during World War II. The ‘welfare’ system has long broken apart families for the crime of being poor. The ‘school to prison pipeline’ guarantees fodder for the corporations of the private prison industry. At each of these times, at least some Americans have stood up to challenge the policy, and today more than ever are standing up.

This kind of isolating and dehumanizing of certain groups is one of the strategies used by fascist states (such as under the Nazis) to scapegoat and blame its victims for its economic failings. The ruling class of billionaires are beginning to resort to fascist measures because the economy is collapsing, and this is their desperate attempt to hold onto power. People who understand this are uniting in moral outrage in defense of those directly under attack, and must continue to do so. If we don’t the rest of us are next, in a fascist state where no one has rights, and children are tortured in cages instead of cherished as our future and our hope.