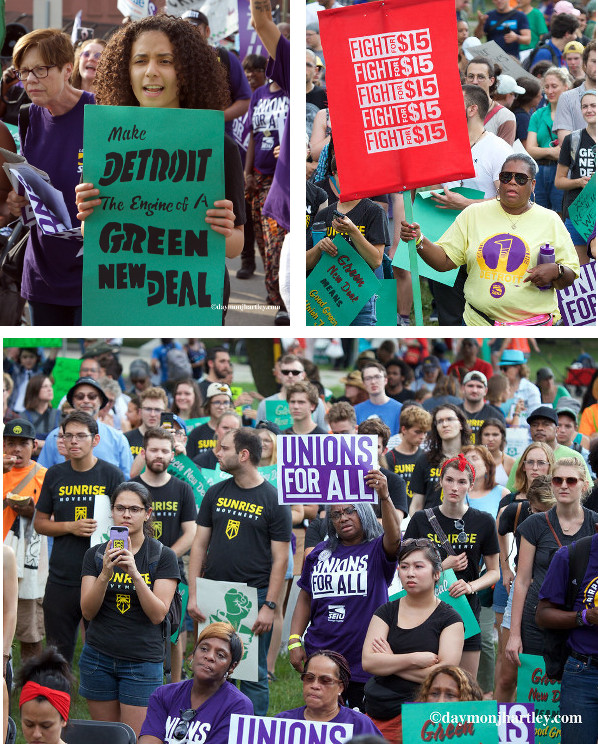 Protesters declare their demands outside the Democratic presidential debates in Detroit in July. As we go to print, the Democratic National Committee (DNC) rejected the youth-driven Sunrise movement’s demand for the Democratic Party to hold a debate on climate change. “The DNC voted to ignore our voices and refused to hold a climate debate. We cannot stand by and let this continue,” said leader Varshini Prakash. The Sunrise movement will join the climate strike on September 20. “This is your chance to be a part of something massive, and to broadcast our demand for a Green New Deal at a scale that our political leaders cannot ignore,” said Prakash.
PHOTOS/DAYMONJHARTLEY.COM

Outside the second Democratic Presidential debates in Detroit, various groups took to the streets to march, rally, and protest to articulate their demands. The spirit of the rally centered on the burning issues facing workers. Climate change and the Green New Deal were at the forefront.

Marchers carried a banner saying “Make Detroit the engine of the Green New Deal,” with signs in the shape of fists held high, painted green with “We Demand Community Control,” “Union Jobs,” “Healthy Food,” “Racial Justice,” “Keep Families Together,” and more. A Detroit group demanded clean, safe water as a “right.” A Flint group said, “Don’t forget about Flint!” Unions were represented and a strong contingent from SEIU rallied around the Fight for Fifteen.

They all marched together, independent of parties, united in demanding the presidential candidates address the issues.

Some of the marchers expressed why they felt it important to be there. Two African American women from Detroit said a lot of people had gotten complacent but stressed that we can come together as Americans. “We can agree to disagree.” They’re concerned about the race relations in this country and one said, “We can’t ignore it. I’m the mother of three African American children and I want them to live in a country where this issue is not hanging over their heads.”

Michael McCord, a disabled vet, thinks veterans’ issues should get more airtime. “We have millions of veterans going around with broken teeth, like myself, and other health problems,” he said.

Varshini Prakash, a leader in the Sunrise Movement, pointedly stated, “Climate change, racism, the exploitative economic system we live under, are connected together.”

Baba Baxter, a disabled Detroit leader, expressed the vision of the Green New Deal. He sees people working and resources shared equitably. He envisions opportunities for children in a world that’s considerate of Mother Earth. He sees Mother Earth smiling, saying, “People will be happier. It’s gonna be a beautiful thing.”

Maureen Taylor of Michigan Welfare Rights aroused the crowd when she said “Stop begging Democrats, stop begging Republicans, stop begging Libertarians” to address the needs of the people. She urged the crowd to take direct action to challenge the system saying, “Tell folks that here in Detroit we’re going to pick up all the homeless and move them into abandoned houses.”

What’s causing homelessness in the “Motor City?” A key thing is that jobs are being lost to automation. Michigan, for example, lost 1 million jobs from 2000 to 2013. Some experts predict that one-third of U.S. jobs could be automated by 2030.

This is why protests that place the people’s demands in the face of the presidential candidates and the parties—including the fight of Sunrise and others to demand that the Democratic Party hold a special debate solely dedicated to climate—are so crucial. We anticipate just as vibrant, if not more, challenges from the grassroots as the 2020 election season unfolds. Follow the People’s Tribune for ongoing election coverage!