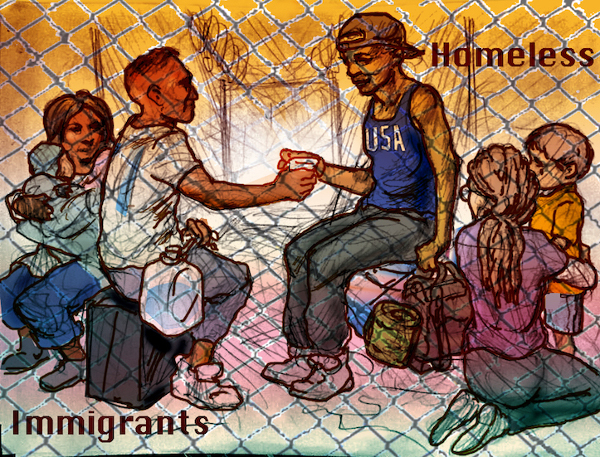 In addition to putting immigrants into prison camps, the government now plans to do the same with the homeless.
CARTOON/ANDY WILLIS

“No FEMA Camps for the Homeless!” has been a rallying cry in the streets and on social media since President Trump’s recent threat to destroy tent communities and force people into federally-run ‘facilities’: empty military bases and other prison like encampments. His words have sparked outrage and fear among homeless people and far beyond, and the determination to resist.

Saying that the homeless ‘live on the best streets of Los Angeles and San Francisco’, cities that ‘destroy themselves’ by ‘allowing’ them to be there, Trump has ominously stated that ‘we’ll be doing something about it’, because the presence of homeless people interferes with ‘real estate’. And this ‘something’ has nothing to do with providing people with housing.

Trump and his administration, in fact the whole corporate class, have shown what they are capable of: stuffing refugee children into concentration camps where they sicken and die. Now they are moving on to the next set of vulnerable people. This is also the next level of mass incarceration as slave labor. People who live on the streets will be swept out of sight into work camps, where their labor will match the cost of the labor of the robots that have taken many of their jobs. This is the fascist face of corporate rule.

The financialization of housing by real estate cartels has driven housing costs and especially rents up so high that many workers simply can’t afford a place to live. Then people’s rights are brutally violated by sweeping them out of sight. This is the next step. Homeless people have seen this coming.

Instead of housing people, the powers that be punish them for trying to stay alive, for the ‘crime’ of being victims of a failing economic system. More and more people, even working full-time, can’t even afford to rent an apartment or room. Many are families who have been through a medical crisis, an eviction or foreclosure, or a job loss. Many homeless people work, often in the gig economy, either part or fulltime. They come from all backgrounds and walks of life, and many are very skilled—yet thrown out of an economy in crisis.

On September 18, the Head of HUD Ben Carson visited a public housing complex in San Francisco’s Potrero Hill district, and was met by protesters. Under his watch, HUD has proposed to cut its budget by 20%, end rental assistance to a quarter of a million families, and threatened to evict 55,000 children of immigrant families from subsidized housing. Five hundred thousand public housing units across the country stand empty.

The fight against this latest attack is a moral and practical one for the vast majority of us who don’t belong to the billionaire class that owns the corporations and controls the government in the interest of their profitmaking. Many of us are a step away from homelessness ourselves.

A 3D-printed house can be created overnight. By one estimate there are six empty houses for every homeless person in this country. We must demand that the government fill existing units and build new public housing, affordable for all, even for those with no income. Various housing groups are demanding that housing be a universal right, and are pushing for massive programs; and a few candidates are beginning to respond.

House all homeless people in decent housing now! Make housing and all we need a human and economic right.

One thought on “Homeless need housing, not prison camps”