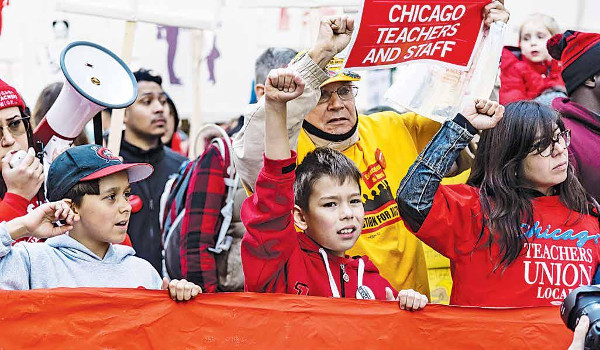 Students and parents were among those marching in support of the recent Chicago teachers strike over the lack of basic resources for their students.
PHOTO/SARAH-JI RHEE, LOVE+STRUGGLE PHOTOS

As the year 2019 stumbles toward its end, one thing seems clear: This year brought to light the obscene wealth, rot and depravity at the top of society—and the courage and tenacity of those at the bottom who are barely surviving.

Consider the top of government. Our country has a president who came to office promising to “drain the swamp.” Instead, he has engineered gigantic tax breaks for the corporations and super-wealthy, put immigrant children in cages, and started a trade war which can only further upend an economy already teetering on the brink of a major recession. He has stoked racial hatred and called neo-Nazis “very fine people.”

Now his adversaries in the top corporate echelons of the Democratic Party caucus in Congress are moving to impeach him. He is being investigated not for any of his stunning acts of cruelty toward the poor but instead for intrigue he has carried on with leaders of other governments. As the year draws to a close, official Washington has become fixated on the Ukraine scandal and the battle over impeachment—all but ignoring the poverty, hunger, and homelessness reaching crisis proportions in so much of America. 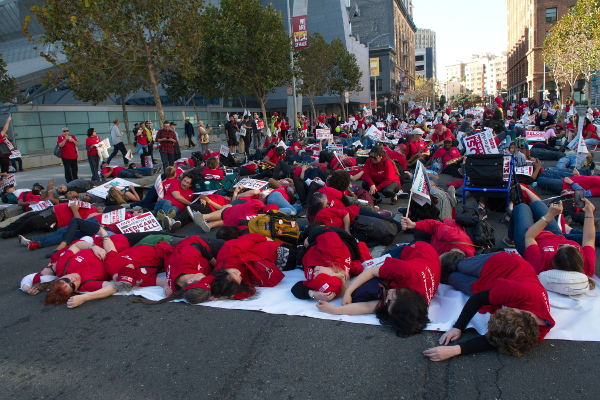 Rally and “die-in” in support of Medicare for All in San Francisco. Thousands of people in the U.S. die each year because they lack health insurance.
PHOTO/LEON KUNSTENAAR

Trump does not stand alone. The year 2019 will go down in history as the year that the billionaire Mark Zuckerberg brazenly defended his right to make millions by helping liars twist the truth on social media, and where Amazon’s Jeff Bezos became the wealthiest man in the world on the backs of low paid workers.

But at the same time, 2019 also produced something positive, a dramatic strike wave that swept the country. In September, students staged a massive climate strike. Just days before, almost 50,000 workers struck General Motors. One month after that, Chicago’s teachers walked off the job, continuing the teacher strike wave that erupted first in West Virginia in 2018. These strikers were not just demanding better wages for themselves; they were fighting for the common good.

Striker after striker explained that they were picketing not just for more money, but because they felt an obligation to aid others in a more vulnerable position than themselves. Chicago teachers demanded protections for immigrant and homeless students—and for more nurses, counselors, and psychologists in the schools. Auto workers insisted on an end to the divisive multi-tier wage set-up which forces some new hires to work as temps with limited benefits. Nurses in Chicago struck for changes that would help their hospital patients get better care. This was a spirit of solidarity with the most vulnerable in society. Fire was aimed at the billionaires and the fact that there is plenty of money to provide for the people. It set an example for the future and shows the way forward to a new America. 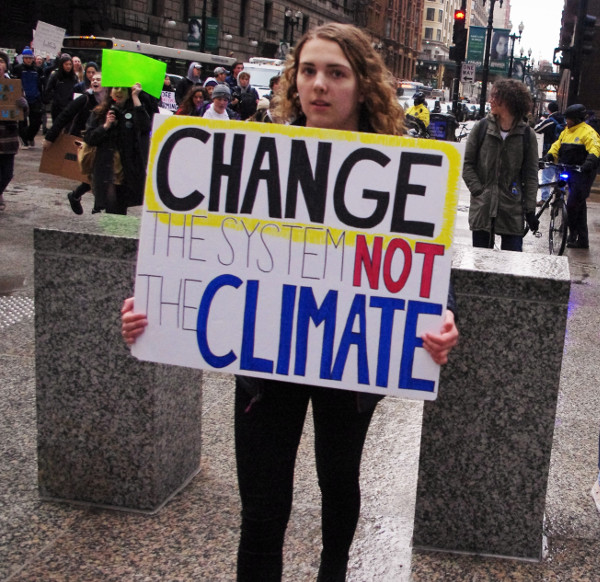 Exactly 200 years ago, a great English writer condemned “Rulers who neither see, nor feel, nor know/but leech-like to their fainting country cling.” Percy Shelley wrote the poem “England in 1819” to denounce the parasites desperately holding on to power in his day, a time of great change as the Industrial Revolution transformed an agricultural society.

America in 2019 has its leeches too. And we also live in a time of great turmoil. Automation is changing our world even more profoundly than steam power transformed the agrarian world of the 19th century. In the midst of today’s upheavals and decay, the spirit of solidarity shown in the strike wave of autumn 2019 should remind us of what’s possible. Sometimes, a Phoenix of unity can rise out of the ashes of corruption and cynicism.

‘Go back to work,’ says Amazon, after worker dies on the floor