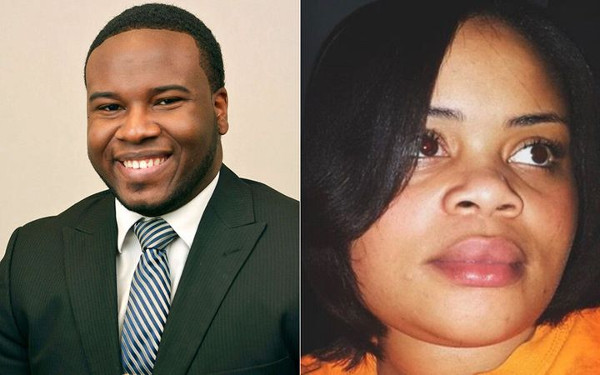 Botham Jean, left, and Atatiana Jefferson, right, were both killed by police in their own homes in Texas.
PHOTOS/RETRIEVED FROM THE INTERNET

“This is something that could happen to anybody. When does this stop? When are we able to just live, to be productive citizens like we were told to be?”
– Ashley Carr, referring to the police murder of her sister, Atatiana Jefferson

The police, especially the white supremacists among them, are escalating their campaign of terror against African Americans. Lately, the national attention has turned to North Texas.

In Dallas in 2018, white officer Amber Guyger murdered Botham Jean in his own apartment. In October 2019, in nearby Fort Worth, Atatiana “Tay” Jefferson, a young black woman, was at her mother’s home when a white cop, Aaron Dean, shot her to death through a window without ever identifying himself.Now, it seems, African Americans are not safe from the police anywhere, even in their own homes.

Police in America kill about 1,000 people a year, at least. While about half of those killed are white, people of color—especially African Americans—are killed in disproportionate numbers. Black men are 2.5 times as likely to be killed by police as white men.

In the early 1990s, an investigation revealed the existence of a violent white supremacist gang in the Los Angeles County Sheriff’s Department. And when the FBI warned in 2006 that state and local law enforcement agencies were being infiltrated by white supremacist groups, nothing was done. Last April, members of known white supremacist groups took part in a protest organized by the Chicago police union against the county’s elected black state’s attorney, yet the union never denounced their participation. White supremacists have helped create a culture of hate inside police departments and outside of them.– Ashley Carr, referring to the police murder of her sister, Atatiana Jefferson

This campaign of terror against African Americans is worsening in step with the economic crisis all over the country that drives the police brutality in poor communities of all colors. Earlier this year, a writer commented on the acquittal of a Pittsburgh cop who killed a black youth on his first day on the job. “Few things signal that black people aren’t wanted in a local economy like police officers killing our children with impunity,” he said.

On his YouTube channel, comedian and commentator D.L. Hughley noted that both Jefferson and Jean were educated professionals who were “excellent human beings.” Now, he said, “You’re killing the best of us. You are killing the things that we were told to be to stop dying. … They will kill you on sight because of the color of your skin and it is, whether people like this or not, viewed as a weapon.” He urged white Americans to stop looking away. “You are killing our tomorrows because you get to look away. You get to say, this is not my problem. It is. Because not only are you killing our tomorrows, you’re killing somebody that can contribute to yours. They can make your
life better.”

What can we do? For one thing, we need more citizen coverage and exposure of the white supremacists who live behind badges and guns, and more exposure of police violence generally. Numerous police murders and acts of brutality have been publicly exposed due to the vigilance of ordinary people using their cell phone cameras. Recognizing the common interests and potential power of the millions who are united across lines of color and nationality by our common humanity is essential. The campaign to stop police terror and brutality is
everyone’s fight.