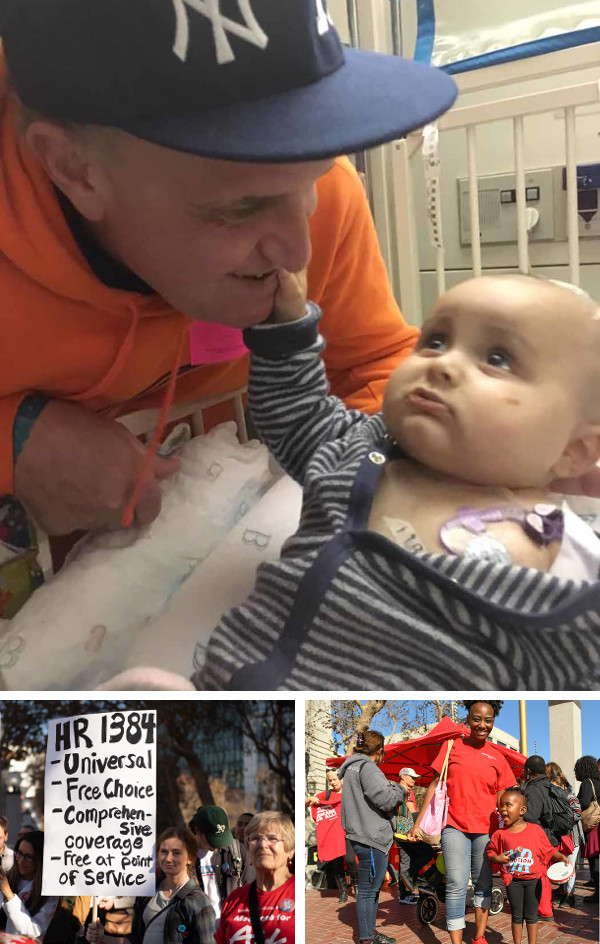 [Top] This 9-month-old baby was denied clinical trial treatment by the insurance company, after surgery for an aggressive brain cancer; the company deemed it not medically necessary.
PHOTO/FACEBOOK
[Left, both] Medicare for All rally in San Francisco.
PHOTOS/CORNELIA GRIMES

As we approach the primaries for what will certainly be one of the most important presidential elections in history, tens of millions of people are looking for a candidate who will challenge the corporations and billionars, and put government on the side of the people. And it’s painfully obvious that the corporate wing of the Democratic Party and the media that support it are doing everything they can to derail this massive movement for change.

You can see this in how the corporate funded presidential candidates have united against candidates who have a program in the interests of the people, such as Bernie Sanders. You can see it in how the news media brazenly promote corporate mouthpiece Joe Biden as the “leading Democratic contender,” and in how candidates such as Michael Bloomberg, Deval Patrick, Amy Klobuchar and Pete Buttigieg are paraded as possible alternatives acceptable to the corporations if the bumbling Biden embarrasses himself one too many times.

The assault on serious proposals for Medicare for All has been the tip of the spear for the corporations’ attack on the movement to take government away from the corporations. Likewise the corporate ridicule heaped on those who are fighting for the Green New Deal as part of the effort to stop the human contribution to climate change.

Maggie Mills, a 45-year-old artist and university professor who suffers from multiple sclerosis, wrote recently on Common Dreams about the debilitating symptoms of MS and her fear of ending up without healthcare. “I live in crippling fear of the fact that all of the money I can summon from the people I know cannot pay for my healthcare needs, present and future. … This is a fact. My current disease-modifying drug alone costs $8,000 per month.”

She warns her readers to think about their own possible future healthcare needs, and she implores them, “Consider, while you may acknowledge your other privileges, you may overlook your well and able-bodied privilege. Consider what it means for you to tell me that it’s too hard to care for me when you do not suffer the same lack of privilege. And then fight for me. Fight for your future self. Healthcare is a right. Medicare. For. All.”

Maggie’s fight is everyone’s fight; millions already have no ready access to healthcare, and any of us with access to care could easily lose the healthcare we have. And the struggle for healthcare is just one among many struggles such as climate, housing, education, and immigration, that are calling the whole economic and political system into question.

Is government going to be transformed to serve we, the people, or is it going to continue guaranteeing the wealth and power of the corporations and billionaires? We have to keep the pressure up on the candidates, and on every political institution and level of government. This means marching, demonstrating, voting, organizing and more to deliver the message: This country belongs to we, the people, and we will do what it takes to have a government and society that serves our needs.

Impeachment: What’s at stake for us all when govt serves the billionaires