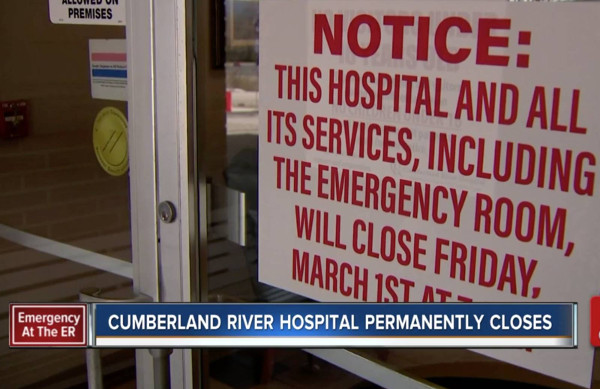 Hospital closures, particularly in rural areas, are another manifestation of denying healthcare for all.
VIDEO STILL/NEWS CHANNEL 5 NASHVILLE

From Dixville Notch, NH, to Des Moines, IA, the most important issue of the upcoming election is healthcare. Four in five Americans believe our current system has reached a crisis in terms of affordability.

One of the many indicators is that the number of uninsured people increased for the first time in 10 years, climbing to 27.5 million in 2018. The number of underinsured has also increased steadily, topping out at 44 million in 2018. In 2018 we spent $3.5 trillion on healthcare, or almost 18% of our GDP. The average of other developed countries is 11.5% of GDP. Americans pay more for healthcare than anyone else in the world, where roughly half as much is spent.

In the past, America’s allegiance to employer-based insurance made good economic sense. Wages and employer contributions were generally aligned with the yearly increase in the cost of healthcare. Now a family insured by a large employer has to contribute 67% more than it did 10 years ago. Since wages have only increased by 26% in the same time frame, one has to wonder why anyone would prefer it over a plan that covered more for less.

Corporations are now focused on improving automation technology to boost their profits. An assembly line robot doesn’t need a pension or health insurance. Large retailers will need less employees for the same reason. Employer-based health insurance may meet the needs of some for now, but expecting it to be there through retirement and beyond is unrealistic, especially with the evolution of the job market.

In the rest of the industrialized world if a person gets sick, they go to the doctor without having to worry about the $3700 average out-of-pocket Americans pays every year. Nor do they have to worry about losing employer-based insurance should they get laid off or decide to find employment elsewhere.

Profit is the goal of our current healthcare system. For example, spending on marketing by the industry was $17.6 billion in 1997. In 2016 it was $30 billion, with 68% of that spent marketing to doctors. The price of the top 20 medications taken by seniors has increased at 10 times the rate of inflation the last five years.

While the industry’s profit increases more every year, our ability to pay for services of diminishing quality outpaces our earnings at increasing yearly levels. Last year the healthcare insurance industry alone made $30 billion in profits.

We know they use fear to divide and conquer us, keeping our attention focused on each other rather than the unchecked avarice of the wealthy. But this time, this tactic is more obvious than ever. With healthcare the result is deny and die.

According to a recent Fox News poll, 68% favor Medicare for All. Real Medicare for All would create a single national health insurance program to provide everyone in America with comprehensive coverage, making care free at the point of service—no networks, premiums, deductibles, copays or surprise bills. It would include dental, vision, prescription drugs and more.

The candidates in the upcoming election better not depend on party affiliation to carry them to victory. Even if a voter’s family has been Republican since Lincoln, or Democratic since Roosevelt, it doesn’t matter. What matters most is which candidate has a plan for reforming healthcare so everyone has it.