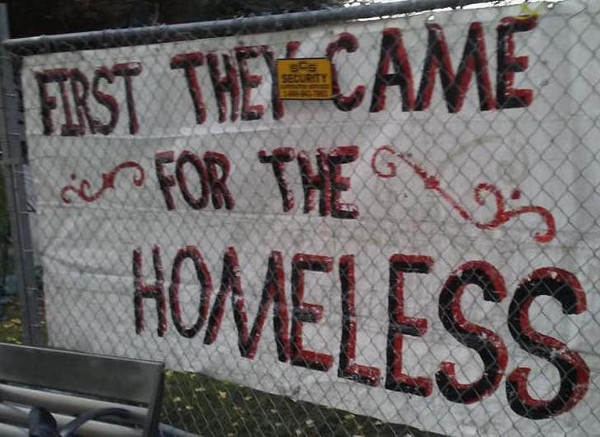 Now is the time for all people of conscience to speak out and act decisively to block the Trump administration plan to round up homeless people just like the Germans rounded up the Jews in World War Two. After complaining that homelessness is “disgusting” and reduces property values, Trump stated his intention to use police to raze tent cities and force homeless people into government facilities.

In December, Trump confirmed his plan by appointing Robert Marbut as head of the U.S. Interagency Council on Homelessness. Marbut is known as the “Joseph Mengele of the homeless” for his cruel experiments and philosophy that the solution to homelessness is punishment, not housing. After decades of failing to house its people, the government is moving to call working people no longer needed by the tech economy “Lebensunwertes Leben”—the Nazi term for “life unworthy of life”.

It is a shocking sign of the times that we have to restate this fundamental truth that no human being is unworthy of life. When we defend homeless people, we are defending life itself. Organize resistance in every community. Demand local declarations of sanctuary for the poor and homeless. Demand non-cooperation with federal anti-homeless arrests. — From the Editors

7 thoughts on “Stop Trump plan to round up homeless people”