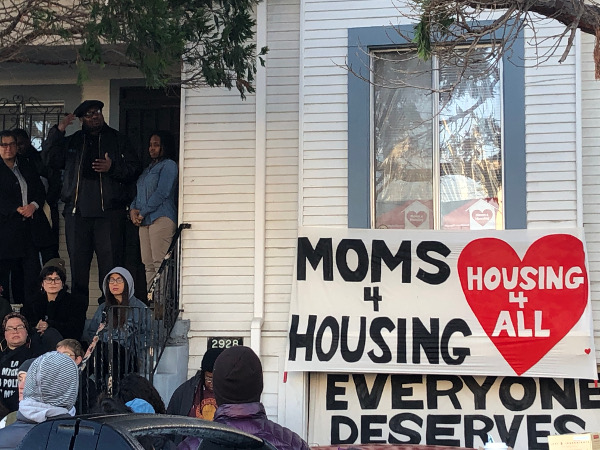 Moms4Housing rallied the Oakland, CA community when they took over a vacant investor owned home kept off the market to drive up prices.
PHOTO/KIMBERLY KING

People across the world are talking about how the Moms 4 Housing group in Oakland, CA, won a victory after their homeless members occupied a vacant house owned by an investment company.

One of the Moms occupying the house, Dominique Walker, told a reporter, “Shelter is a human right … and it shouldn’t be commodified.”

Commodifying housing has become a trend. When investment columnist Mark Hulbert was asked during a January interview, what is the more profitable investment: stocks or real estate, he answered, “If one were to press me into a bet for the next decade I think I’d bet on real estate over stocks.” Then on Jan. 9, a survey was released showing 97% of major corporate chief financial officers expect a recession in 2020. Thirty five percent of those surveyed are looking to layoffs as a profitable “defensive” measure.

Also in January, three homeless people, Christina Fowler, 53, Gregory Corcoran, 40 and Tony Williams, 50, were shot to death while they slept on the streets of Baton Rouge, Louisiana. It could be argued that if these three people were not homeless, they would still be alive. Let’s connect the dots.

When corporations buy housing, its not to provide people with a human right to housing. Their only concern is profits. They accomplish that by keeping their properties vacant, forcing the supply down and the demand up, until it is expensive enough for them to make maximum profits. This practice has contributed to a situation where in many cities the number of vacant units outnumbers the number of unhoused persons. Oakland, CA for example has 3.8 vacant units for every one homeless person. This is so lucrative that the Census Bureau reports nearly 3 million homes and 13 million apartment units are owned by LLC, LP and LLP shell companies.

Meanwhile, 4.4 million Americans are on HUD’s waiting list for housing, many of them homeless. And yet, 453,000 of HUD’s 5,035,824 units remain off-line in need of repairs (HUD office of Policy Development and Research 2018). One look at HUD’s 2020 budget cut of $9.6 billion, with capital funds for repairs on units to make them occupancy ready slashed to zero, informs us that this is being done on purpose in lockstep with private sector corporations.

If there is a recession followed by mass layoffs, with the continued practice of purposely keeping housing vacant in order to make it more expensive, along with a lack of public housing, then 2020 promises to be a perfect storm for a sharp increase in homelessness, and with it, more needless deaths on the street. Bitter cold weather makes being homeless in cities like Chicago, Detroit or Milwaukee in the middle of winter a possible death sentence.

Shall we repeat for the entire nation the late summer of 2012 when 165 homeless people were buried on the same day in paupers’ graves in Homewood, IL, a suburb of Chicago, where caskets with unidentified bodies went into the ground bearing the words, “known only to God?” Or shall we celebrate the lives of all those martyred by the system and then fight like hell for the living?

The homeless need tents, blankets and warm food, i.e., the necessities of life, right now. And they need the rest of society to become part of the movement they are building that will house all Americans and end homelessness forever. 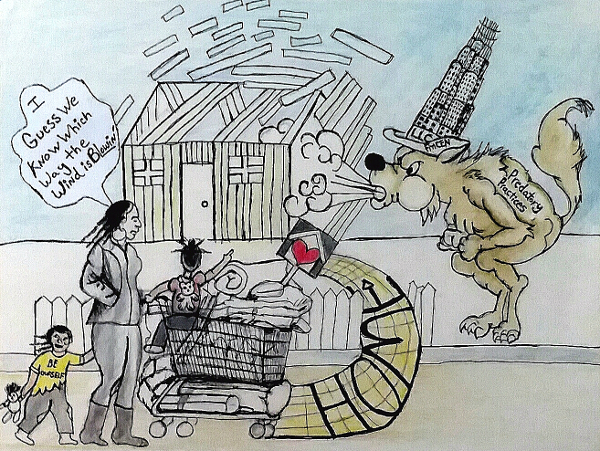