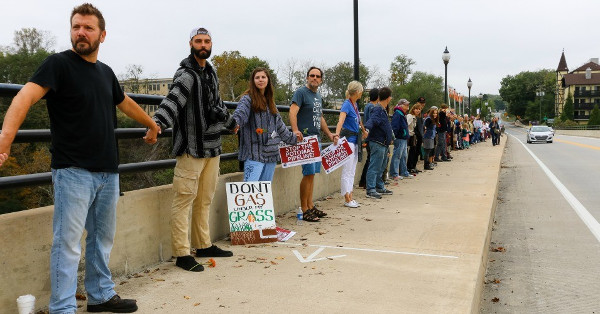 This photo is of the 2017 Hands Across the Potomac protest on a bridge between West Virginia and Maryland against a fracked gas pipeline that would cross the Potomac River, and the Rockwool plant the pipeline would serve.

A dangerous anti-protest bill, HB 4615 passed the WV House in mid-February and was scheduled for a Senate committee hearing March 4. The bill would make pipeline and industrial site protests illegal. Activists were able to get amendments to the bill taking out some penalties that would lead to imprisonment, but the bill, not yet signed by the governor, is still dangerous.

“Silencing those of us who are trying to protect our water and air and to preserve our quality of life for the future is not in anyone’s best interest,” said Mary Mattlage at the hearing.

“They want a cancer alley on the Ohio River because they’re aware Cancer (Death) Alley along the Mississippi River could be underwater in some years. So it would be a Death Alley 2,” said Tracy Cannon who led a coalition of citizens against the Mountaineer gas pipeline that cuts through the Eastern Panhandle.

A Facebook post on the Appalachians Against Pipelines page states, “When the permitting agencies are in the pockets of industry, and the laws are written by the industry, sometimes the only effective way to protect our homes is to put our bodies on the line. This very dangerous bill needs to be stopped.”