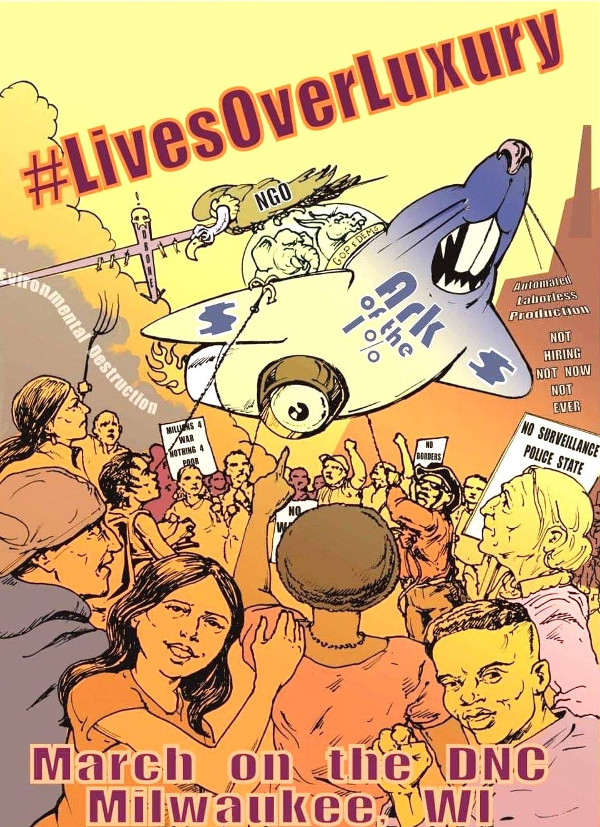 PHILADELPHIA, PA —The Poor People’s Economic Human Rights Campaign (PPEHRC) and the Poor People’s Army are organizing the #LivesOverLuxury March on the opening day of the Democratic National Convention in Milwaukee, WI, on July 13, 2020 at 4pm. This is an opportunity for your voice to be heard. If you need help joining us for the march please reach out and we would love to help you. Our website is economichumanrights.org.

Since 2000, PPEHRC has had the largest marches outside both the Democratic and Republican National Conventions each election year. This year, at a time so crucial for the future of humanity and the planet, PPEHRC will amass the largest Poor People’s Army this country has ever seen outside the DNC to take back the 67 cents of every government dollar spent on war and occupation, to end poverty and all forms of violence at home and abroad.

PPEHRC is dedicated to organizing and educating around issues of education, food justice, health care, student debt, community and police violence, climate crises, lack of living wage jobs, and homelessness. We believe that money should be put toward America’s people here at home and to be used for these issues.

PPEHRC is dedicated to building a movement that unites the poor across color lines. Poverty afflicts people of all colors. Everyday more and more people are downsized and impoverished. Millions of Americans are in poverty, and millions more working and middle-class people are just paychecks away or medical bankruptcies away from homelessness and poverty. This is not a new kind of organization, rather it is a nonviolent army of the poor, similar to peasant armies in other parts of the world. With the world’s press and attention on the theatrics at the Democratic and Republican conventions, the Poor People’s Army will put poor people front and center in a historic march that will demand a different kind of world where the world’s resources are protected and used to meet the basic needs of all people.

The global elite have deprived the masses of a living wage, access to stable housing, healthy food, and quality healthcare. We are at a tipping point. Millions are cast out of their communities, disconnected from one another and social institutions. With so many adrift in media noise, drugs, and violence it is vital that we focus, organize, and begin to restore authentic connections and systems of mutual aid to prepare for what is to come.

This future is not preordained; it can and will be contested. We will fight inhumanity with relationships. Our clarity is an antidote for corporate propaganda. Together we will channel our creativity and expose these sickening schemes while making provisions to care for one another with shared resources.

Because we know you know the seriousness of all this, we are asking for your assistance. We intend to go to Milwaukee, WI, July 13, 2020, and demand that both political parties begin to prioritize #LivesOverLuxury. We are #coming2getour67cents of every tax dollar that is spent on war and occupation, to put towards the poor, the planet, and to preserve humanity.