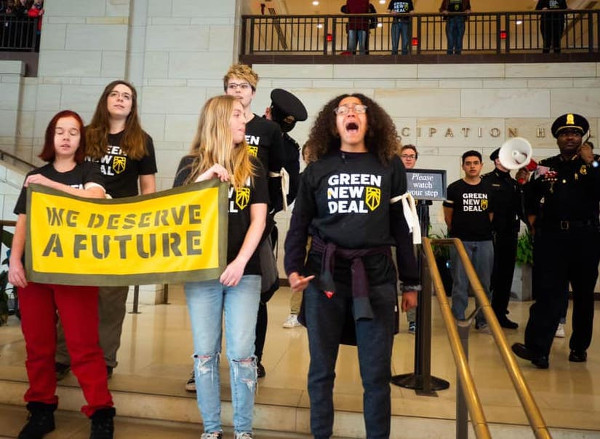 On these pages are stories of the fight to save our Earth from the scourge of dirty fossil fuel corporations and secure clean water as a human right for millions of people.

March 22 is World Water Day, and we remember the words of a Flint water warrior who said, “We need to get J.P. Morgan, Chase Bank, Veolia and Wall Street out of our water, along with the toxins.” And, on April 22 we need a huge showing at the 50th anniversary of the original Earth Day, says the youth-led Sunrise movement. “The movement for the Green New Deal doesn’t start, or stop, at the ballot box . . . we are going to show the politicians in power that we are not letting up by making this Earth Day the biggest climate strike in U.S. history!”

Corporations have trillions of dollars to buy elections and influence politicians to implement laws in their favor, to guarantee their profits and power, and to divide the world among themselves.

We, the people, are fighting to forge unity around our survival and for a government that uses our vast resources to take care of the Earth and its inhabitants.

We need to take the power away from these giant corporations that control our lives and destroy the planet for profit.

“We’ve got to bring China and Russia and Brazil and Pakistan and India and every major country on Earth into the fight against climate change, and here is my dream — maybe it’s a radical dream, but maybe just maybe, given the crisis of climate change, the world can understand that instead of spending $1.8 trillion a year collectively on weapons of destruction designed to kill each other, maybe we pool our resources and fight our common enemy, which is climate change.”— Bernie Sanders

Oil drilling in Apalachicola Bay will be catastrophic