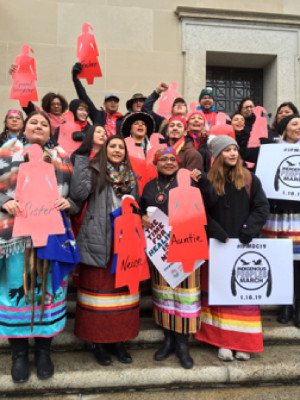 Indigenous women lift up names of their missing and murdered Indigenous relatives, Washington, D.C. at the Indigenous Peoples March in 2019.
PHOTO/DIANA BEREK

Lifting up the names of loved ones lost to violence, Indigenous women are leading a powerful international coalition to stop violence against Indigenous women. The numbers are
staggering.

Although many cases go unreported or ignored by U.S. and Canadian Federal, state, provincial or local law enforcement, still the estimates in Canada are that indigenous women are murdered at a rate 10 times higher than women in any other demographic. In the U.S., Indigenous women are more than twice as likely to experience violence. Lisa Brunner, Executive Director of Sacred Spirits First Nations Coalition states, “What’s happening through U.S. Federal law and policy is they’ve created lands of impunity where there is like a playground for serial rapists, batterers killers. And our children aren’t protected at all.”

In 2019, the Democratic controlled House passed H.R. 1585 (Violence Against Women Reauthorization Act of 2019) to increase and strengthen prosecutorial rights for the tribes, but the Republican Senate has stalled the bill.

The murders and sex trafficking are linked to “man camps,” which are the labor camps of men without families, that are installed by corporations doing the logging, mining, and pipeline construction. Corine Fairbanks, Oglala Lakota and AIM activist, says that an historical track of violence against Indigenous women goes all the way back to the beginning of colonizing and settling the Americas; a history which treated Indigenous people, especially women, as less than human. But Fairbanks says that women are the link between the past, present and future. It is the responsibility of society to stop corporations that enable the violence by putting their interest in profit over the rights and welfare of people. “We are connected to the earth, the moon, and the water. Our bodies are affected by the moon, our bodies are affected by the water. We are connected to Mother Earth spiritually, physically, emotionally. We should be protected.”

Indigenous women are leading the way through the powerful coalitions demanding that the silenced voices of loved sisters, mothers, and daughters be heard, that their names be known, and their lives be honored. No More Stolen Sisters, Missing and Murdered Indigenous Women, REDress Project, Sisters in Spirit and others are marching with red dresses, with faces painted with red handprints and turquoise tears to bring to the attention of the world the necessity of protecting women from all forms of violence.

“The abuse of women is well known in history and tells you a lot about what is happening to our Earth.” – LaDonna Brave Bull Allard, Standing Rock

Watch video of the People’s Tribune interview with Corine Fairbanks at bit.ly/corineinterview