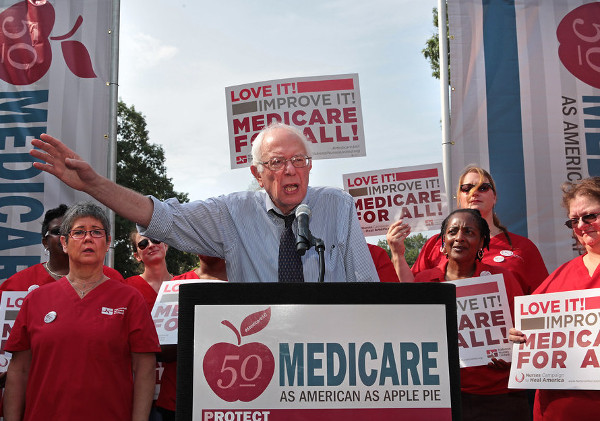 Sen. Bernie Sanders on the 50th anniversary of Medicare in Washington,
DC. Last year, Sanders and over a dozen cosponsors introduced the Medicare for all Act of 2019 in the Senate saying healthcare is a human right
Photo/NNU, Rick Reinhard/flickr)

Editor’s note: Vast numbers of people are participating in the 2020 election campaign to demand change. Here we look at the Bernie Sanders campaign. See our web page for more election coverage at peoplestribune.org

“If you are willing to fight for a government of compassion and justice and decency, not only will we win this election but together we will transform this country.

“The pain that one person feels if we have children who are hungry in America, if we have elderly people who can’t afford their prescription drugs … that impacts you, that impacts me—we are all in this together.”

Those were the eloquent words of Sen. Bernie Sanders. In speeches, videos, and comments during the presidential debates, Sanders repeatedly condemns the cruel operating of the American economy. He pointedly asks asked how we tolerate a situation in which a handful of millionaires and billionaires live in luxury while tens of millions of people struggle to survive. He dares to question why this country spends 10 times more than any other country on its war budget, and calls for money to be transferred from the war budget to social programs. Sanders has also emerged as the most prominent advocate in the US for a universal, single-payer health care system—”Medicare for All.”

Sanders also pledges: “We’re going to develop a humane border policy. … We will not be a government that snatches babies from the arms of their mothers or puts children in cages.” He has announced a $2.5 trillion housing plan designed to end homelessness and limit rent increases across the country by imposing a national rent control standard. He has spoken out passionately in defense of public schools and public school teachers. Sanders supports labor-law reform measures that would remove blocks to unionization. He has called for wiping out student debt. He is committed to transforming the country’s energy system to 100 percent renewable energy, and has been particularly forceful in condemning the greed of the fossil fuel industry. Sanders calls for ending private prisons and detention centers, and ending the mass incarceration that disproportionately affects people of color. And he says women should make the decisions about their bodies, not politicians.

These progressive positions have struck a deep chord with an important segment of voters—especially those in an economically precarious position. Sanders’ forthright support for a single-payer health care system has won him the enthusiastic endorsement of unionized nurses and many physicians and other health-care workers. His recognition that we are facing a potential environmental catastrophe has secured the support of the Sunrise Movement and other young people. His pledge to make it possible for every workplace to have a union is creating growing good-will within the grassroots of the union movement.

In fact, the Sanders candidacy has developed into something much bigger than one individual’s quest for high office. The campaign has become an expression of a cause—part of a new, multi-racial, multi-generational movement to transform America.

This new movement will continue after the primaries. As Bernie himself puts it: “It’s not me. It’s us.” The millions of people who have been drawn into this battle are not just fighting to elect one man. This is a gigantic effort to change America, to make America what it should be and can be—a just society for everyone.

What are your thoughts on the elections?

We would like to hear from our readers about what are your thoughts on the 2020 elections. Which candidate do you think has the best program for you, and why?