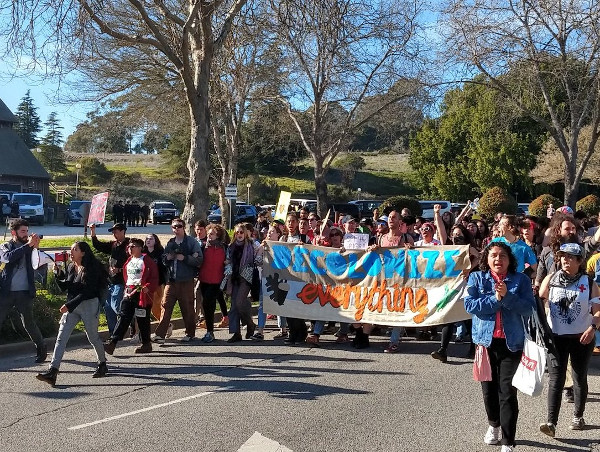 Graduate student employees at the UCSC are on a wildcat strike for a cost of living wage increase so that they can afford housing in this high-rent community.
PHOTO/@PAYUSOREUCSC

The People’s Tribune’s Sandy Reid interviewed Yulia Gilchinskaya, an organizer of the wildcat strike of grad student employees at UCSC for a COLA increase to afford Santa Cruz rents averaging $2600/month for one-bedroom apartments. Up to 80 students have been fired; international students could face deportation. But the strike continues and support is growing. UCSC students in the hundreds pledged not to accept positions made available by the dismissals. Solidarity is growing across UC campuses, nationally and even abroad. See the full interview at bit.ly/UCSCstudentstrike

“In the past five years, rents went up in Santa Cruz over 50%. We are asking for an increase in our wages so we don’t pay more than 30% in rent. We found that a lot of students are or have been homeless. Some live in substandard housing infested with rats, mold. Most of us are one crisis, one paycheck away from being houseless. So, we came up with the amount of $1412 a month increase and grad students all responded with, ‘Yes! Why continue to provide labor for an employer who doesn’t provide a living wage?’

“So, on December 8, we went on strike and since then we are withholding thousands of fall grades. The chancellor offered a $2,500 a year needs-based housing supplement, a fraction of what we asked for, and only to some grad students. As of Feb 10, we have been on a full strike. We are withholding our teaching and research labor until we get the COLA increase we demand.

“On the first day [of our blocking entrances to the university] I saw with my own eyes the police being very violent. Several people have bruises on their chest and stomach as a result. On day 2, we had a standoff with police in riot gear. On day 3, police arrested 17 people, using pain compliance techniques. That was heartbreaking and really intense. The university employs police forces from out of town, paying $300,000 a day for that.

“Support is incredible. We are building community . . . [and] students are beginning to imagine a different university, one that is not abusive to us, that doesn’t see students as a source of capital, that sees them as individuals and human beings and invested in their learning and well-being. I would hope that this campaign is part of a broader movement and will continue to grow.”