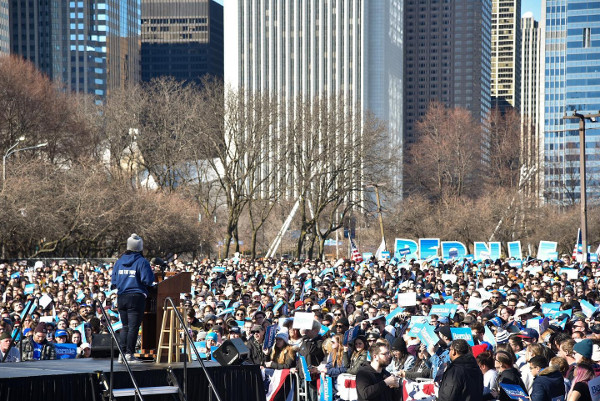 Super Tuesday results have created what will now be a seesaw battle for the Democratic nomination for President. The Bernie Sanders campaign has given a voice to American people left out of the economy by automation, especially the young, who are disproportionately facing housing and food insecurity, burdened with debt, and preyed upon by police violence. They are marginalized and enraged. Their demand that the government meet their basic needs is powering the Sanders surge. They hold the power to transform society, and are leading the battle for democracy and against corporate dictatorship in the country as a whole.

Sanders has repeatedly said that his campaign is not about him, but the “multi-generational, multi-racial coalition” that is building the movement. Each one of your votes, your words, and your actions will impact the narrative and the outcome of not only the election, but everything we are fighting for. Sanders can win only if he holds the majority of pledged delegates sent to the Convention. The Democratic super delegates have already said they will steal it from him if they can. The bigger the victories in remaining primaries, the greater the chance of a Sanders nomination.

Your vote is necessary but not sufficient. The entire American system of democratic elections—which has always been marred by Jim Crow—is now in danger of being shredded altogether by voter suppression and wholesale disinformation. Trump and the pro-corporate Democratic candidates have vowed that “America will never be a socialist country”.

What they mean by that is not some label that Bernie Sanders calls himself. They intend to stop by any means necessary the Sanders program: improved and expanded Medicare for All, decent housing, decent education without debt, meaningful work, a path to citizenship for all, an end to mass incarceration, and a Green New Deal.

The abundance created by modern technology makes all these things easily possible and practical. But to get them we have to expand our movement, educate ourselves, and continue fighting for political power both before and after the elections.

Insurance is not healthcare: remove profiteering from the system