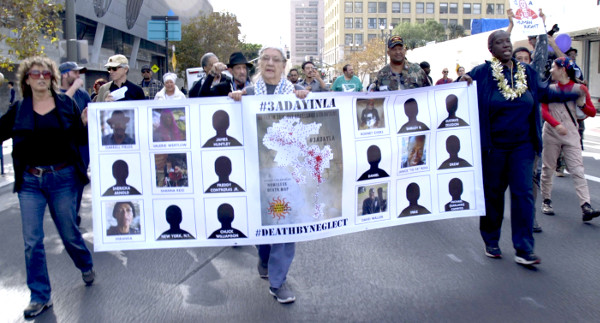 Memorial for homeless people who recently died on Skid Row in downtown Los Angeles, hosted by the organizations LACAN and Services Not Sweeps.
PHOTO/PAUL FREEDMAN

LOS ANGELES — Homelessness is the biggest issue. They just cut the HUD budget again. Sold public housing, sold Jordan Downs, it is now mixed use, market rate housing. Public housing was originally built for returning WWII soldiers. There was a severe lack of housing and workers were needed for industry, which was producing for the world following the destruction of WWII. Things have changed.

Today there are more police in Los Angeles and the result is more people sentenced to death. There’s more shelters and the results are more deaths on the street. More than 1,000 died while experiencing homelessness. That’s nearly double from six years ago. More than a third were the result of being hit by a car or truck. Nearly one in four of these deaths were from traumatic injury. (L.A. County Department of Public Health).

What is the response of the Police Commission? Issue more tickets for sleeping on the street! These tickets are a barrier to ending homelessness because these tickets turn into warrants.

“We’re out here today with our partners across the city of Los Angeles saying ‘no’ to three deaths per day,’’ Los Angeles Community Action Coalition (LACAN) spokesperson Pete White said. “We’re saying the City has other options. Instead of aggressive policing, put that money into housing.’’

Three A Day Campaign. As a response, LACAN is proposing a campaign called Three-a-Day. The campaign objectives are to establish:

1. That the actual number of deaths is seven to eight folks a day.

3. Create a map of the 15 city council districts that establish where the deaths have occurred, telling the story of each, including street name, date of death and identity of the murdered individual.

4. Create a culture of resistance.

After four years of the city’s measures, Proposition HHH and Measure H, where the people of Los Angeles City and L.A. County voted to tax themselves to provide several billion dollars of housing aid, only 45 housing units have been completed. Forty percent of this money is going to people who are talking about housing.

Due to a 2006 court case, Jones vs the City of Los Angeles, Judge Wardlaw ordered the District Court to stop enforcement of an L.A. city code allowing police to arrest people for sleeping on the street when there are no available shelter beds. Today the police are like Nazi Storm Troopers … everyone is suspect. They come in, attack us, killing three to four houseless residents a day. If this was a hurricane, the government would fly in emergency supplies. The city wants us to believe it’s the Taliban, Al Qaeda, that is terrorizing us. It’s not. It’s the city of L.A.

Together we stand, divided we fall. We say to L.A. City officials, if you can’t offer us housing, get out of our encampments. This is a housing crisis. The City is on the offensive. Our Three A Day campaign is creating a culture of resistance, love of community and all human beings. Housing is a human right.