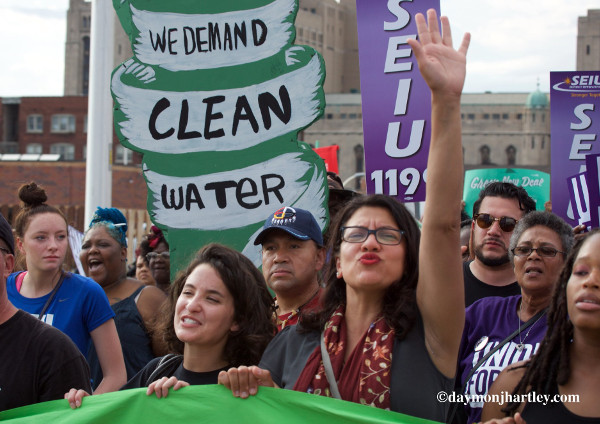 Editor’s note: Michigan Gov. Whitmer has declared a moratorium on water shutoffs and will restore water service to homes in response to Covid-19. This came as a result of demands by the People’s Water Board, along with nearly 40 organizations or individuals. The article below is from a press release from the People’s Water Board issued before the governor agreed to declare the moratorium, and from an NBC25 News interview with Sylvia Orduno of the Michigan Welfare Rights Organization.

Hundreds of thousands of people in low-income families across Michigan have borne the brunt of the record rise in the cost of water services and the unaffordable water bills that have resulted from that rise. The unconscionable act of depriving anyone of water because the cost is more than they can afford has resulted in a health crisis, that, with the advent of coronavirus, has the serious potential to be magnified and spread due to thousands not having access to water.

The ultimate solution is to implement income-based water bills based on the Water Affordability Plan. The immediate, short term solution must be a moratorium on water shutoffs and the immediate restoration of service where it’s been disconnected.

Michigan Governor Gretchen Whitmer issued a statement to the effect that water service is not a necessity in preventing illness. Yet the number one effective preventive is frequent hand washing according to the Centers for Disease Control.

This has prompted the People’s Water Board along, with nearly 40 organizations or individuals, to demand Gov. Gretchen Whitmer use her executive power to end water shut offs. The organization has said access to water is a human right, and Sylvia Orduño, organizer for Michigan Welfare Rights Organization, said it is a matter of public health.

“When we don’t recognize how the impacts affect all of us, then this is really when we’re all at risk for experiencing all kinds of problems when people don’t have water to properly wash,” she said.

Those shutoff from water are more likely to be infants or children, elders, and/or people living with chronic illness—the same factors that predispose people to a more serious course of illness or death if they catch the virus.

“What’s been happening across Detroit and Flint in particular, and lots of other cities is that the rates are outpacing what people’s incomes are, especially when they have to pay for so many other bills.” Orduño said if local and states governments do not resolve the matter of water shut offs, there may be a need for
federal action.