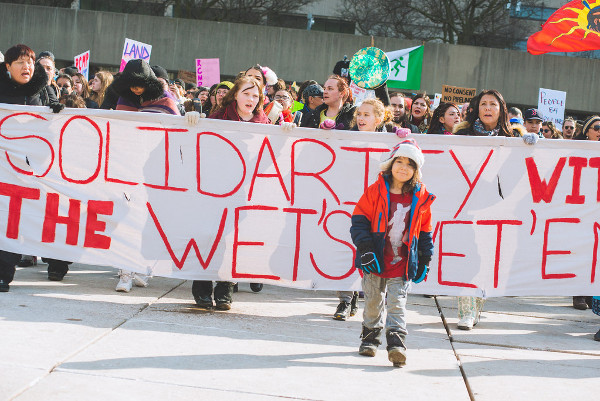 A decade-long battle between the Wet’suwet’en First Nation and a company planning to build a natural gas pipeline through their territory in British Columbia (B.C.) exploded in early February with cross-country protests. More than 150 freight trains have been halted. Protestors’ blockades in Ontario and northwestern B.C. caused over 160 passenger train cancellations affecting 25,000 passengers on routes between Montreal, Toronto and Ottawa. By Feb. 7, 2020, Indigenous solidarity groups and environmental groups were blocking west coast ports and rail lines, and marching in massive demonstrations across Canada and the U.S.

Underlying this conflict is a dispute over sovereignty. The Wet’suwet’en have never ceded or surrendered their ancestral land. Since 2010, the hereditary chiefs have said they will not allow a pipeline through Wet’suwet’en territory, even if that means opposing the B.C. Supreme Court.

The first injunction sought by Coastal GasLink (CGL) was a temporary injunction against a blockade mounted by the Wet’suwet’en’s Unistot’en Camp. On Jan. 7, 2019, Royal Canadian Mounted Police (RCMP) moved in heavily armed officers and arrested 14, including elders and a hereditary chief. This ignited protests by a broad network of Indigenous youth throughout 2019.

The second B.C. Supreme Court injunction was granted December 31, 2019. “Canadian Courts do not have any jurisdiction on Wet’suwet’en Territory. The Wet’suwet’en chiefs have full jurisdiction. We have for thousands of years since time immemorial. We have never ceded or surrendered that jurisdiction,” said Molly Wickam, Gidmit’en clan.

The RCMP again invaded Wet’suwet’en territory on Feb. 6, 2020. Videos of snipers armed with AR-15s pointed at the Wet’suwet’en, helicopter surveillance, and the arrest of 28 Wet’suwet’en Land Protectors went viral, galvanizing climate activists to join with other First Nations supporters.

The Tyendinaga Mohawk Nation (Ontario) immediately set up an encampment of Land Protectors in solidarity with the Wet’suwet’en. The encampment is where the railroad passes through sovereign Tyendinaga Territory. CN Rail immediately sought an injunction which the Tyendinaga said was based on false claims of trespass and rail line obstruction. The Tyendinaga insisted their encampment is on their own land and there was no physical interference or obstruction of the railway tracks. Mohawk organizer Kanenhariyo said they would not end their protest until the RCMP leave Wet’suwet’en Territory.

By the Feb. 23 midnight injunction deadline, with the Wet’suwet’en still being patrolled by RCMP, the Tyendinaga would not de-camp. The Ontario Provisional Police (OPP) moved in and violently arrested six Tyendinaga Land Protectors. Within two hours, the Kanehsatake Mohawk People (Montreal) mounted a slow moving traffic jam at the Mercier Bridge to demonstrate their solidarity with the Wet’suwet’en and the Tyendinaga.

Indigenous Land defenders and non-Indigenous supporters have linked this ongoing crisis to 150 years of colonial and capitalist villainy resulting in the crisis of climate change. Smogelgem, head of the Likhts’amisyu clan of the Wet’suwet’en, said this has been a long time coming. “This has already become a global movement to reclaim our planet, and reclaim it so it does not kill us. Because it will.”