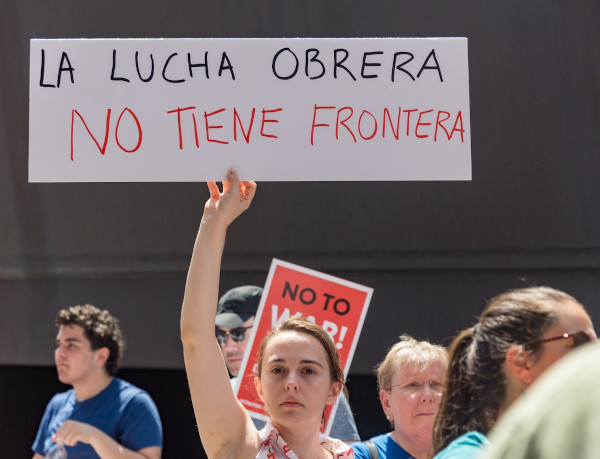 Chicago immigrant rights protest in 2019 demands an end to children in cages and to detentions, deportations, and ICE.
Photo / Sarah-Ji of Loveandstrugglephotos.com

The People’s Tribune’s Bob Lee recently interviewed Antonio Gutierrez, a cofounder of the Chicago-based Organized Communities Against Deportations (OCAD) collective. Below are excerpts. A longer version will appear on the People’s Tribune Latest News site. Learn more about OCAD at www.organizedcommunities.org.

People’s Tribune: Can you give some background on OCAD, and talk about the situation in Chicago?

Antonio Gutierrez: OCAD comes from the Immigrant Youth Justice League (IYJL), which was an undocumented youth-led collective organizing civil disobedience, direct action and storytelling that gave the undocumented movement a face. We were organizing around the Dream Act, access to higher education, educating college counselors about the realities of undocumented students. After DACA (Deferred Action for Childhood Arrivals), the undocumented community continued to experience an increase in deportations by former President Obama. As a result, in 2013, IYJL shifted priorities and formed a network of different students’ groups at universities to create Undocumented IL. Within that OCAD was founded in the groundings of wanting to shift the rhetoric of criminalization of the undocumented community. We believe that those directly impacted, undocumented individuals, should be leading this movement and strategizing on their campaigns,

[In 2013] our anti-deportation campaigns highlighted how ICE terrorizes undocumented communities, violating immigrant rights, and not following its own internal policies and memos. They were pursuing individuals with no criminal record in some cases, or if the individual had a criminal record, many times from years ago, then it was being used to place them into the deportation machine.

Now in the midst of COVID-19, OCAD is leading the campaign here in Illinois at the state level of #FreeThemAll, a national campaign demanding the release of all undocumented detainees in detention centers. There are continuing COVID-19 outbreaks inside CBP and ICE detention centers.

We continue to do our anti-deportation campaigns with individuals. We’ve been able to get three individuals released from detention. Currently our most high-profile campaign is the one of Beto. Beto was arrested last year, and [detained by ICE] for over eight months. We got him released in February 2020, [but then in June ICE detained him again and deported him to Mexico]. We are in the process of filing litigation against ICE on the basis of retaliation and how ICE processed Beto differently than any other person we know of. We believe that it was based on his activism and how outspoken he was about his treatment in the detention center, and also just how public the campaign was. And we now know that ICE is surveilling OCAD’s social media platform, and members are being surveilled as well. And so we’re using all of these bases for the litigation we’re filing against ICE.

We continue to highlight the human rights violations of ICE operations, and how local law enforcement continues to work with ICE, regardless of Chicago’s title of a sanctuary city. There are still ICE raids occurring, regardless of our sanctuary status.

We also created a mutual aid fund that has distributed over $65,000 to undocumented families in the Chicagoland area. And many of these individuals also are experiencing some type of deportation process.

We are also the leading organization for all of the different rapid response neighborhood networks that were created in the Chicago area after the election of 2016.

OCAD is doing a webinar series called F*ck ICE 101, exposing how ICE operates. There’s also plans to do a People’s Academy, led by the Illinois Coalition of Immigrant and Refugee Rights, here in Chicago.