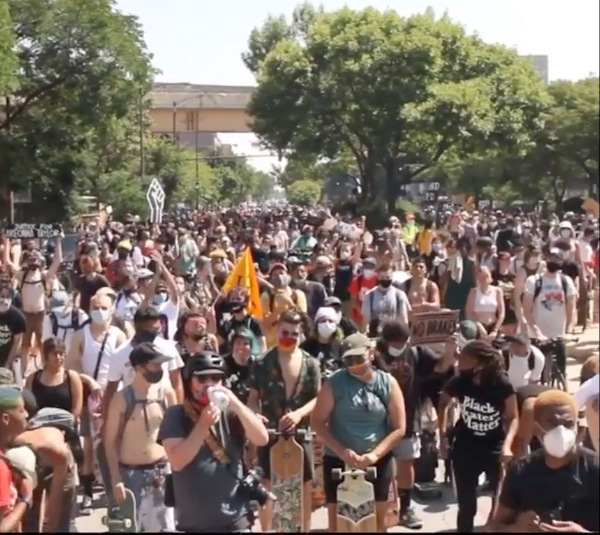 Rally at Whitney Young High School to demand that Chicago City Council defund the police by 75 percent and invest in the community.

CHICAGO – The board of the Chicago Public Schools voted on August 26 to renew its district-level contract with the Chicago Police Department to assign officers to schools.

The board’s decision means the School Resource Officer (SRO) program will continue only in the 55 schools where the local school council (LSC) had voted to keep SRO. Earlier this summer, 17 other LSCs voted to end it.

Young activist movements in Chicago have been campaigning against SRO under the hashtag #CopsOutCPS after the Minneapolis school district cut its ties to the police following George Floyd’s murder.

One of the Chicago groups is GoodKidsMadCity (@GKMC18), which is made up of “Black and Brown young people united in fighting to end violence in our cities” who “call for more resources to underserved communities.” One of its organizers, Miracle Boyd, was bloodily assaulted by a Chicago cop during a protest earlier in the summer.

GKMC at once denounced the school board’s decision in a tweet, saying: “@ChiPubSchools doesn’t GAF about students and our safety! The BOE WHO ISNT ELECTED ONCE AGAIN VOTED TO KEEP COPS IN CPS!!!”

Black Lives Matter Chicago (@BLMChi) tweeted: “This decision perpetuates a system that targets Black, Brown, and disabled students with physical and emotional trauma. Everyone that voted yes should be ashamed.”

During the 2019-20 school year CPS paid $33 million to hire police officers in schools with access to school computers. The 2020-21 school year contract with the police has been reduced to $12 million.

Activists criticized SRO for officers entering students’ names into CPD’s notoriously wrong Criminal Enterprise Information System – known as the “gang database” – which in turn serves Chicago’s school-to-prison pipeline. Under the Chicago Public Schools’ plan for the coming year, CPD computer terminals will be removed from the school and SRO cops will be barred from the gang database.

Meanwhile, there have been several days of protests by Loyola University students demanding that campus police cut its ties to CPD. (A Loyola official wrote that campus police are legally required to work with CPD and that “calls to sever all ties are not practical.” The official did not specify what law links the university to CPD.)

Among the rally’s demands is that the Chicago City Council defund the Chicago Police by 75 percent and invest instead in non-jail services and community programs. Another is the enactment of CPAC, an elected citywide civilian board overseeing the police, as well as closing of Homan Square and all other Chicago Police illegal secret detention warehouses called “black sites.”