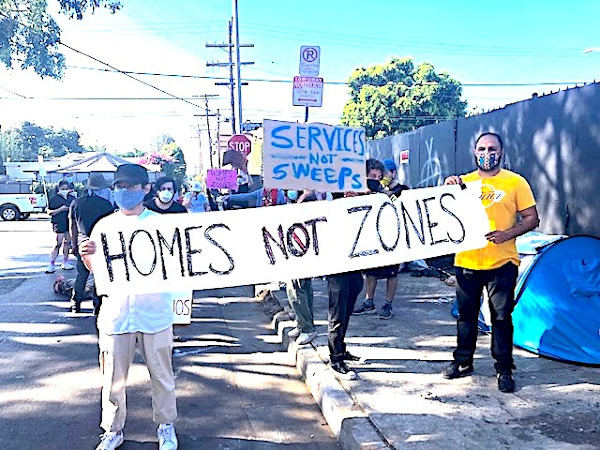 Protest in Hollywood to prevent the city from taking people’s property at homeless encampments.

It started out, 150 tents on Skid Row, now it’s 5,000; they are all over the place and it’s because the city has been criminalizing homelessness. It doesn’t have a damn thing to do with clean-ups. All this shit started as a result of the city trying to wiggle its way out of a lawsuit, Tony Lavan v. the City of Los Angeles, (a temporary restraining order barring L.A. from “confiscating personal property of the homeless when not abandoned and destroying it without notice”).

The city in the last 15 years got hit with five serious lawsuits, and instead of adhering to the lawsuit, they try to wiggle out of it. In the name of public health and safety they lock down, they move shit, they take shit, do all kind of stuff, right? Trying to get out of the Tony Lavan lawsuit in 2012, the city appealed all the way to the 9th Circuit Court of Appeals. The 9th Circuit told the City to build more housing. ‘We’re not going to rule in your favor that restricts property rights to a certain group of people!’