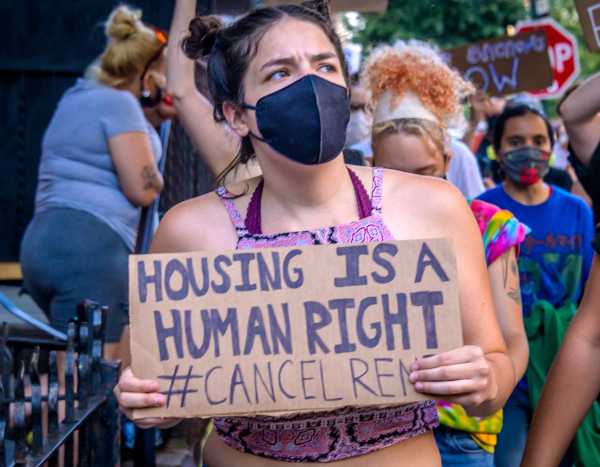 On September 1, in the midst of the pandemic, the limited federal eviction moratorium ended, setting millions of renters and mortgage-payers up for losing their housing. This as unemployment is at an historic high, leaving struggling people at risk of ruin. Millions, including those who have never known poverty, are struggling with hunger and to pay their bills.

Now the President has ordered a moratorium on evictions that will give renters and home owners temporary reprieve from being evicted until December 31. Diane Yentel of the National Low Income Housing Coalition, who praises the order as “unprecedented” and “long overdue,” also says, this is a “half-measure that extends a financial cliff for renters to fall off of when the moratorium expires and back rent is owed.” (Politico). Millions will not be in financial shape to pay at the end of the moratorium. A tsunami of evictions is expected eventually, with many falling into homelessness.

The federal stimulus package (passed in March) gave billions in tax breaks to wealthy real estate developers — and a pittance given to the people. We need guaranteed income for all, as well as canceling the rents during this deadly emergency, and beyond as needed, to keep us in our homes and safe.

The housing crisis is showing the moral and economic bankruptcy of a system run by billionaires and corporations. The fight to cancel the rent, stop evictions, and house the homeless is a fight for a society where everyone is guaranteed a decent life.

Homes not Zones in Hollywood, CA

A failing nation piles debt on backs of poor