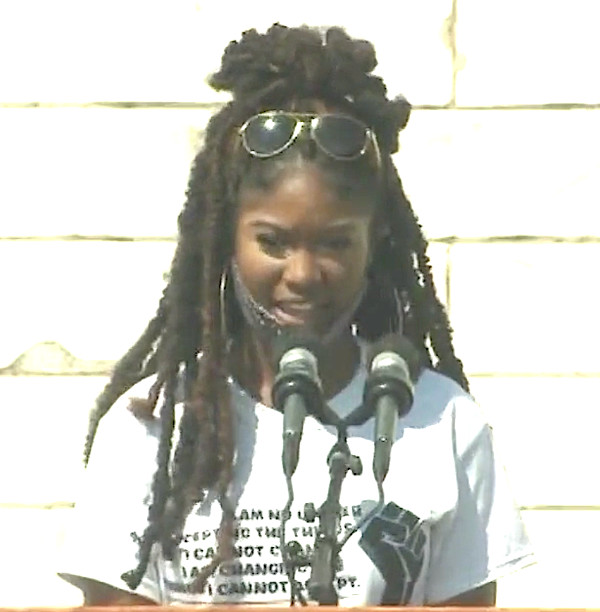 Thousands joined the Commitment March on Washington, a call to action against racism and police killings of African Americans. Among the speakers were relatives of George Floyd, Breonna Taylor and Eric Garner, and young visionaries such as those below.

Excerpts from a speech from Aaliyah Eastman, a survivor of the Parkland school shooting.

“I am one of the millions of young black women who make up the backbone of the American progressive movement . . . my journey of activism started by a senseless act of gun violence. When a fellow student opened fire in my classroom in Parkland, Florida, as I laid beneath the lifeless body of my classmate Nicholas Torres, to survive, as bullets riddled my classmates. . . . I was then born again with a voice that cannot and will not be muzzled . . . My brush with death by a gun is . . . an experience that is shared by too many of our generation. I am not the first in my family to be affected by gun violence. My Uncle Patrick was gunned down in the streets of Brooklyn at the age of 18, just months after being beaten by New York police who deemed his black body in a white neighborhood a threat . . .

“Law enforcement has failed to prevent the flow of guns into black communities [and] perpetuated violence . . . studies show that persistent gun violence in poor communities of color directly results from centuries of disadvantages, economic deprivation and policymaking. Gun violence is the last domino to fall at the end of a long line of racism, trauma, and indifference.

“But this is not inevitable. Community-based intervention programs throughout this country have proven that holistic culturally sensitive embedded teams can stop violence before it starts. We demand funding for these programs. . .

“[As] I talk about gun violence, I address police violence . . . there is a need for a national conversation of defunding police departments and refunding our communities. We must reallocate those funds into schools, jobs, and the needs for a comfortable life. We must empower citizens of the community being policed to hold their local forces accountable . . . We demand to live in peace . . . but this dream . . . cannot be realized until we get a federal government with our best interests at heart. For our part, the Brady team is engaged in a campaign is to remove barriers to casting a ballot, making vote by mail available to all, to ensure ballot drop boxes are distributed equitably, restoring voting rights of Americans.”
Aaliyah is executive council member of Brady’s youth-led team, ENOUGH.

Martin Luther King’s granddaughter: We will fulfill his dream