‘We stand on your shoulders to push humanity forward’ 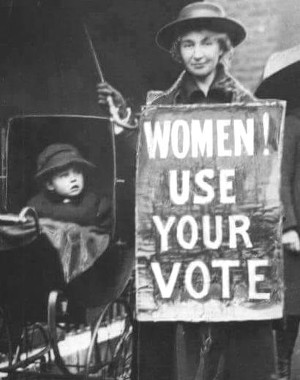 Celebrations are taking place today because valiant and courageous women secured women’s right to vote via the 19th Amendment, which was ratified August 18, 1920. Here were cadres of women (and supportive men) who suffered imprisonment and police brutality, who were force-fed when they went on Hunger Strikes, and more. How could the suffragists win the passage of this historic amendment when they themselves could not vote—and in the middle of the 1918-1920 flu pandemic, no less. In the early years of the movement many women’s groups modeled their activities from the anti-slavery /abolitionist movement. Their victory stands as an inspiration to all who fight to advance the causes of humanity.

Days after the Trump inauguration in 2016, women’s groups organized what was hailed as the biggest March on Washington in history. In 1920, shortly before winning the right to vote, women marched on Washington at the inauguration, sending a clear message to the newly elected president, Woodrow Wilson. The 2018 election cycle brought forward historic numbers of women candidates to Congress. Furthermore, that same election cycle produced the most diverse Congress in history.

Just as the 1918 pandemic did not detour the struggle, today’s COVID-19 pandemic has if anything emboldened women candidates. The 2020 election cycle has already outpaced 2018; 574 women ran in primaries for Congress, up 20% from 2018! What’s key is that a growing number are running on social justice platforms. The coronavirus pandemic has elevated the fight for Single-payer Healthcare. Paula Jean Swearengin, Democratic candidate for US Senate from West Virginia, has made this a centerpiece of her campaign, picking up an endorsement from Bernie Sanders. The George Floyd murder brought national and international outcries to end police brutality and systemic racism. These events no doubt impacted the decision to tap Kamala Harris as Joe Biden’s VP pick. It also churned up the momentum for congressional candidates like Cori Bush (D-Missouri)—a Black Lives Matter veteran—and Marquita Bradshaw (D-Tenn), an environmental racism fighter, to win their history-making primaries.

We say to all Women who labored to secure the 19th Amendment, salute!

We stand firmly on your shoulders to push Humanity Forward!

VOICES OF THE ELECTIONS