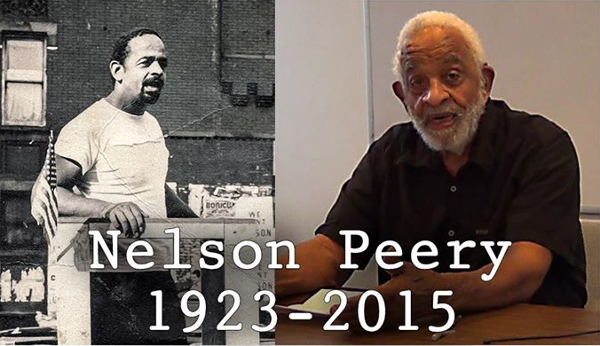 At given moments, history creates possibilities for humanity to progress. Whether the opportunity comes to fruition depends on the conscious activity of people. In such periods, outstanding individuals who understand what history has made necessary and possible can make a decisive contribution to liberating humanity. Nelson Peery was such a person.

He was an American revolutionary and lifelong communist. Nelson fought capitalism throughout his life, never failing to educate everyone he met about the vision of the new world that is possible and how to achieve it. A World War II veteran with three campaign ribbons and four battle stars, his life and revolutionary work is documented in his published works. He was a founding member of the League of Revolutionaries for a New America.

Nelson, a great revolutionary thinker of our times, helped develop the theoretical, philosophical, and organizational foundation for the time when conditions would make revolution possible. He understood that individuals can accomplish nothing acting alone, and he worked constantly with others to build revolutionary organizations aimed at making workers conscious of their revolutionary role. He always said that organization and consciousness are the only weapons the workers have in their struggle for a new world. Nelson stressed the importance of studying and learning how to analyze the world in order to change it, and he felt any worker could do this.

Nelson’s contribution bridged two historical epochs, beginning in capitalism’s industrial era and ending in the era of electronics. He was among the first to grasp that electronics is permanently replacing human labor, and that this fact means that a cooperative society where society’s abundance is distributed to all is no longer a dream. Such a new society is simply the practical solution to the crisis of a dying capitalism. Nelson also wrote groundbreaking works on the color (race) question, and was among the first to recognize that the economic changes wrought by electronics—which results in growing sections of workers becoming equally impoverished—is today undercutting the rulers’ ability to use color to divide workers. “I don’t care whether you are Black or White or Latino. When the robot comes into your factory, you are laid off,” he said. But, he also understood that working class unity must be fought for.

As part of the struggle for this unity, Nelson fought for the role of a revolutionary press in educating and arousing the people. “A movement,” he said, “is a cause and a press.” He pushed for the People’s Tribune, and its sister publication, the Tribuno del Pueblo, to be visionary papers of and for the growing revolutionary movement. These papers are today emerging as a voice of the homeless and other struggles for survival.

Comrade Nelson, we thank you for your profound devotion to and faith in the working class andyour conviction that this fight can be won. We call on our readers to continue to help build a revolutionary press that the movement so urgently needs. We call on you to contribute articles, raise funds and distribute the People’s Tribune and Tribuno del Pueblo in order to help humanity fight for the new, cooperative society that history now demands. Time is short.

Where our rulers offer only poverty, fascism, war, and possible nuclear and environmental destruction, the unity of workers at the core of a huge movement for a new cooperative world has the potential to save humanity. Nelson’s message to revolutionaries would be: “To the forge, Comrades! Strike where the iron is hot!”

Donations in celebration of Nelson Peery’s life can be sent to People’s Tribune, PO Box 3524, Chicago, Il 60654 or donate via Paypal at peoplestribune.org

Charlottesville: We must organize the people

While I feel very good that there has been a quick response by some to denounce the intimidating, harassing, threatening, violent behavior of the …

With a small stick he worked the grains of wheat
out of the cracks between the rotten boards
of the boxcar floor flying through the Depression
and built a little mountain of them in his palm,

Upon Reading “Man With the Hoe”

Strangling in the muck of history. He leans against the tavern wall. And silently gazes across the Avenue. Where watchdogs of property. With vulture eyes …

It is with great sorrow that we inform you that our beloved comrade, Nelson Peery, editorial board member and founder of the People’s Tribune, …

April 18, 1994 On  April 29, The New Press will publish Black Fire: The Making of an American Revolutionary by Nelson Peery. This book should be read by everyone fighting to end poverty and injustice in America. Black Fire recounts …

If you would like to view older articles covering Nelson Peery, published from 2005 to 2012, please click on the button below.