The Future Is Up To Us 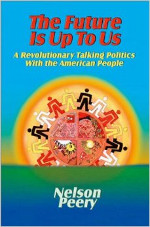 In 1994, Nelson Peery, a veteran of the Second World War, published a hard-hitting autobiography called Black Fire: The Making of an American Revolutionary. It won critical acclaim because it told the truth about what it was like to be a young Black man in America during the Great Depression and then fight in a segregated army. Peery wrote the book because he wanted to show how people become revolutionary from their life experience, and the conclusions they come to about what must be done to make America live up to its promise.

When Nelson Peery spoke at bookstores or was interviewed by journalists, he was bombarded with questions. He was asked to comment on events since World War II—on international politics, on the role of race in American life, the role of young people in the fight for a new society, and many other issues. So, in 2002 he wrote another book on those subjects, The Future Is Up to Us: A Revolutionary Talking Politics With the American People. The second edition of The Future Is Up to Us has just been reprinted. Get your new copy. Send a $15 donation for the book through Paypal on this site or by sending to Speakers for a New America, PO Box 3524, Chicago, Il 60654-3524.

The Future Is Up to Us contains many insights, some great personal stories, and vividly conveys the author’s heartfelt certainty that the human race can do away with exploitation, creating a new world where everyone can lead a happy, fulfilling life. When The Future Is Up to Us first came out, it was read and discussed by many people involved in the fight for a new society. It sparked some lively debates and made people think. We need more debate  and more critical thinking in this country today. You can help make that happen.

To make a donation for a copy of the book, go to: http://www.speakersforanewamerica.com/books.html#Future