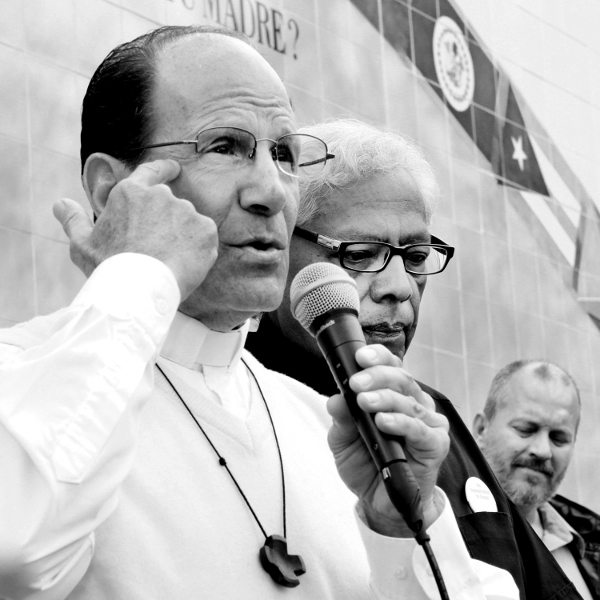 Father Alejandro Solalinde, a Mexican priest, headed a caravan through the U.S. to denounce the brutality suffered by our migrant brothers and sisters from Central and South America. Thousands of migrant victims are killed and/or disappeared.
Photo/David Sandoval

Laura Garcia, editor of the Tribuno del Pueblo, had the privilege of talking with Father Alejandro Solalinde who headed a Caravan through the U.S. to denounce the brutality suffered by migrants from Central and South America. He gives perspective on the importance of the development of consciousness in part one below. In part two, he discusses strategy and building unity.

CHICAGO, IL — I bet on organization. I bet on developing consciousness. I bet on unity.

The Caravan Opening the Doors to Hope was well received in some places more than others.
The church is showing some trepidation, not because of me, but because of what I represent. I represent pressure to change, a dissident voice. It makes them uncomfortable. Like a pebble in their shoe, they don’t know what to do with me. But I love them and I respect them. My desire is always to get close to them, to help them not be afraid, to encourage them to change, to try to take that urgent step forward.

But if there’s no consciousness, people won’t succeed. 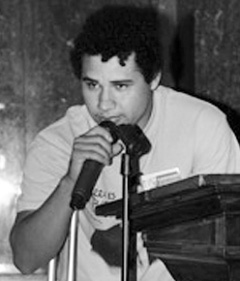 Pedro, from Honduras, was part of the caravan. Due to violence and the economic situation, he decided to migrate. In Mexico, he climbed onto the bestia (train) and his leg was cut off.
Photo/Mary Kay Yarak

I am totally against any action of authority or power that manipulates people. Manipulation does not take into account people’s consciousness. For example, I grab you and move you here and there. At the end, I replace you. The same with paternalism.  It’s a way to replace your consciousness, to make decisions for you, to take away your freedom. It’s another form of not taking you into account. Or worse yet, it’s authoritarianism. I instill fear in you. I pressure you and make you move anywhere I want.

The Caravan is shaking people’s consciousness, making people think. We do not know when they’ll react, but we know some day they’re going to. We’re setting the foundation and bringing consciousness.

The Caravan is teaching me about the bowels of this system in the United States. It has helped me see the famous “rule of law.” What barbarians! They have used the law as a weapon. Let’s take the Native Americans. The colonizers make their law, and automatically declare that the Native Americans have to submit to it. If not, they break the law, and the colonizers, legally screw them over.

It’s the same with the immigrants. They have made laws to criminalize immigrants. These immigrants, who heroically insist in coming, are merely incidents to them. They call it a crime for immigrants to fight for their families. But they’re the ones who drafted these laws to make the poor criminals.

This is what we need to expose. If the laws are standing in the way, we need to organize to overthrow and get rid of those laws. But we must do it with intelligence.