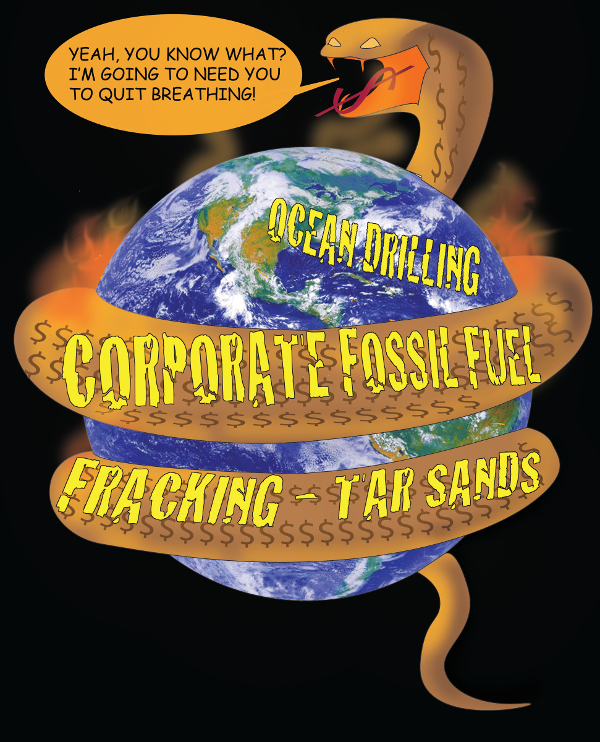 We are fast approaching a point of no return. The weather extremes caused by burning fossil fuels will continue to worsen, causing drought, floods, and more killer storms. Our fresh water supplies are fast disappearing as they are privatized for the profit of a few and spoiled forever with “fracking” chemicals. To save ourselves, our children and the world, we must put an end to the capitalist system. This is possible today.

Capitalism is in crisis. Jobs are being eliminated permanently by computerized automation, creating a new class of workers facing destitution, hunger, homelessness, illness and death. Since corporations must compete to maximize profit for their shareholders, automation increases exponentially, creating an epochal crisis of the system itself. Workers cannot buy and capitalists cannot sell. This demands that corporations must increase the exploitation of both human and natural resources in their quest to remain profitable, to survive.

Anything that stands in the way of this process under this system of private ownership of our socially created wealth is removed by the corporate State to facilitate the accumulation of private property for a tiny but powerful global class of capitalists. This is the process transpiring on a global scale today.  Our needs as human beings and the very environment we depend on for life itself are sacrificed on the altar of corporate profits and Wall Street speculation.

After WWII, the American ruling class spent billions of dollars from war profiteering to build an economy and society based on corporations and fossil fuels. Trillions of dollars are now invested in this system worldwide. No single corporation can step back and change its course to benefit humanity and save the earth or it will be swallowed up by another corporation. Corporate leaders understand that they have no choice but to follow the “laws” of private property, putting profits ahead of saving the environment and also the human life dependent on it. Every “solution” the corporate ruling class puts forward only serves their interests while paying lip service to “saving” the environment and creating “jobs.”

All of the wonderful technologies that have the potential to produce a world of abundance while protecting Mother Earth will not be used unless it is profitable for the corporations. Those technologies exist today. But we do not have the political power to organize society around their use. In order to create this new society we need to fight differently than we have in the past. We must recognize that our interests as a class, as workers who shed blood, sweat and tears over generations to produce this social wealth are in direct opposition to the interests of the class of billionaires that own this wealth. We must unite around a vision of a better way, where the interests of humanity, not profits, drive the world economy and society.

Only a cooperative, communal society in which each of us can contribute to the well-being of the other and share in the earth’s bounty can save us now.