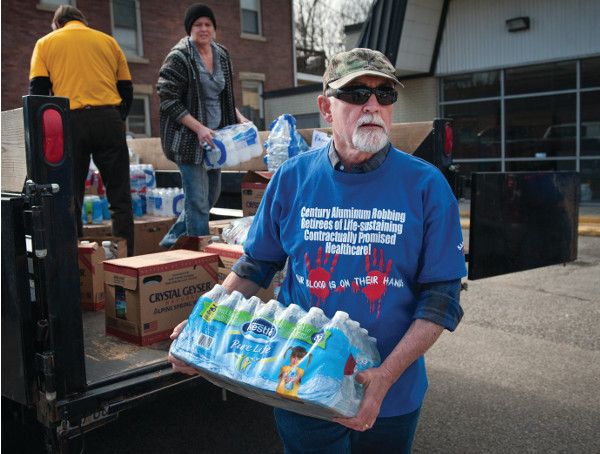 Ron “Ripcord” Dixon from Evan, WV, unloads a case of water from a trailer filled with donated water
brought in by Century Aluminum retirees from Ravenswood to a Clean Water Hub distribution point in East End, Charleston.
PHOTO/JAMES FASSINGER

WEST VIRGINIA — It’s been more than two months since Freedom Industries spilled 10,000 gallons of toxic 4-methylcyclohexane methanol (MCHM) and an unknown amount of a polyglycol ethers, known as PPH into the Elk River, a tributary of the Kanawha River, in Charleston on Jan. 9, 2014. Nearly 300,000 residents from nine counties in the vicinity of Charleston, WV were without drinking water after the spill occurred just upstream from the main West Virginia American Water municipal intake and treatment center. State officials issued a ‘do not drink’ order late in the day after the spill occurred. On Jan. 13, the advisory was lifted but seven weeks later, residents and some businesses still continue to use bottled water for drinking and cooking because they do not trust that the water is safe.

Past experience with government and the failure of agencies entrusted to protect them and their environment over the decades here in the heart of coal country, is at the heart of distrust many West Virginians feel about their government after the spill. Although state authorities declared the water ‘ok’ to use just four days after the spill and Barbara J. Reynolds, Crisis Communication Specialist for the CDC used the word ‘safe’ in a TV news interview on Feb. 24, a State of Emergency is still in effect for nine counties in the state, giving residents little confidence in the actual safety of their drinking water.

One bright spot in all of this has been the WV Clean Water Hub, a grassroots all-volunteer group funded by donations from across the country and tasked with getting residents safe bottled water. The Hub came together as the community joined with established environmental groups like Aurora Lights, Coal River Mountain Watch, Keeper of the Mountains Foundation, Ohio Valley Environmental Coalition and RAMPS, when they saw an inadequate response from the state in getting residents clean, safe water. The group has been distributing water to people in seven of the nine affected counties since the first days of the spill, after setting up a Facebook page and putting the call out through InterOccupy for volunteers and donations of water and funds—all of which have been flowing in from across West Virginia and surrounding states. They have so far been able to do what the state has failed to—coordinate home deliveries of free water to elderly, disabled and other residents who cannot get out to pick it up themselves.

As politicians, state and federal agencies, as well as scientists debate ‘how safe’ the water is to drink, residents continue to struggle with the decision of whether to drink the water or not. Many with children are seriously considering moving out of the state, while others are trying to figure out how they are going to pay for bottled water as long as they live in the affected counties. It seems that at least for the foreseeable future, until long-term water quality studies can be conducted, uncertainty about whether the water is actually safe to drink will be a daily fact of life for West Virginians.