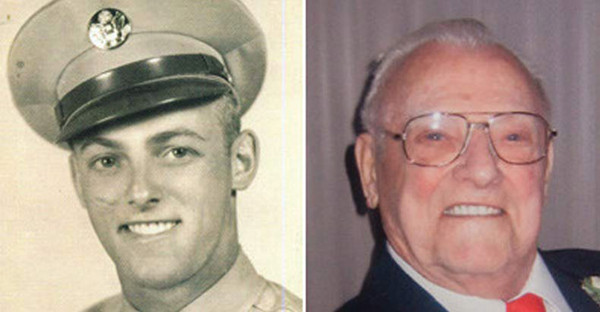 Police fired five consecutive beanbag rounds into this 95-year-old man’s body at an assisted living facility. He died the next day.
PHOTO/THEFREETHOUGHTPROJECT.COM

MILTON, LA — A Park Forest, Illinois police officer has been acquitted in the death of a 95-year-old WWII veteran. Officer Craig Taylor was acquitted of reckless conduct, the one charge he faced for the negligent killing of another human being.

John Wrana Jr., 95, was killed during an altercation with Park Forest police when they responded to a call at his retirement apartment in June, 2013.

The incident began when the police were called to the Park Forest Assisted Living Center after Wrana refused treatment for what the staff believed to be a urinary tract infection.

Apparently the police are the “go to guys” when you need to force medical treatment on a 95-year-old man.

When the Park Forest cops arrived, predictably the situation then escalated to violence. Wrana did brandish a fileting knife. However, the police mistook a shoehorn for a machete and raided Wrana’s room.
Instead of waiting for the 95-year-old to simply take a nap and go in peacefully, the police used the only tactic they know, violent escalation.

When a taser was fired by an officer and missed, Taylor fired the beanbag gun from 15 feet away, in clear violation of the manufacturers instructions. He fired five consecutive shots into the 95-year-old in a matter of seconds.

In a Lawsuit filed by the estate of Mr. Wrana, the family alleges that the officers acted “willfully, wantonly, intentionally, knowingly, maliciously, in bad faith and with deliberate disregard.”
“There was nothing criminal about his actions,” the judge said in a Markham courtroom. He cited that the force Taylor used was, “not excessive.”

Unfortunately, many people will look at this situation and feel that justice has been served. However, it was not only Taylor’s actions that led to the death of John Wrana that day, but also the actions of the entire system; a system who owes its very existence to the monopoly it holds on the use of violence.
When violent force is relied upon to convince an elderly man to get tested for a potential medical problem, we as a society lose out.

An innocent man who only wanted to be left alone had a team of state agents, whose sole purpose is to use violent coercion to force compliance, dispatched to his residence.

These very state agents, ostensibly acting in defense of that man’s life, ended that man’s life instead—and the system that killed him defends this response. Tis a sad day in the supposed Land of the Free.
Read more at http://thefreethoughtproject.com/officer-killed-95-year-old-wwii-vet-refused-medical-treatment-guilty/#MxeWZo16LeygRWqw.99