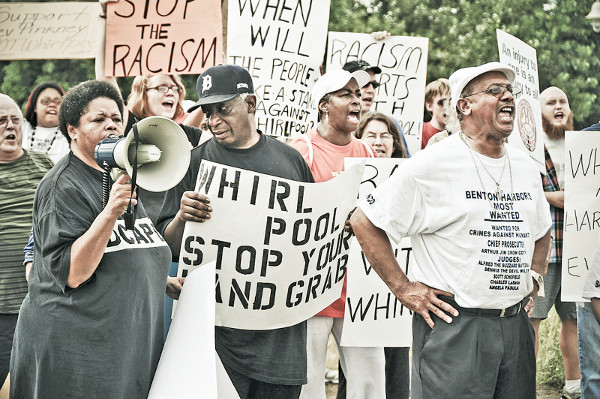 Rev. Pinkney (center) at a protest against corporate redevelopment of Benton Harbor, MI, which is creating greater poverty.
PHOTO/BRETT JELINEK

Editor’s note: Rev. Pinkney, a community leader who takes on corporate power, was convicted of vote fraud charges without any evidence in a recall campaign in Benton Harbor, MI. He was sentenced to up to ten years. He is currently in prison.

MARQUETTE, MI — It is our constitutional duty as American citizens to hold our elected officials accountable for their work, action and inaction of wrongdoing, which includes judges.
Corruption and deceitfulness continues in the Berrien County Courthouse in Michigan.  We must fight for justice everywhere and for all.

The Berrien County Courthouse does not provide a just legal system. It is so blatantly corrupt that even the legal establishment has been forced to recognize it. The corruption starts at the top—with the Whirlpool Corporation as the driving force, unified with government on all levels, the police and court system. The corporate controlled news media is part of it too. Never once did they mention that there was absolutely no evidence against me. We live in a society controlled by the corporations, government and the corporate media.

In my motion for a new trial, I will argue that 1) there was absolutely no evidence to convict me; 2) the juror, Gail Freehling, concealed information during jury selection, lying under oath; and 3) the illegal sentencing and for an appeal bond.

The case of Rev. Edward Pinkney is a concentrated expression of this process of the corporate takeover of America and of the criminalization of a generation of people. They customarily, and regularly deprive poor Blacks, Hispanics, and whites of due process. When are the people going to take a stand? The challenge is clear.

This is not a Black issue nor it is just an issue of people of color. In this prison, there are way more whites than Blacks. When they throw race into it they divide us. It is rich against poor, haves against the have nots, us against them. It is a whole country issue.

We can win. There is more of us than them. We must say enough is enough.