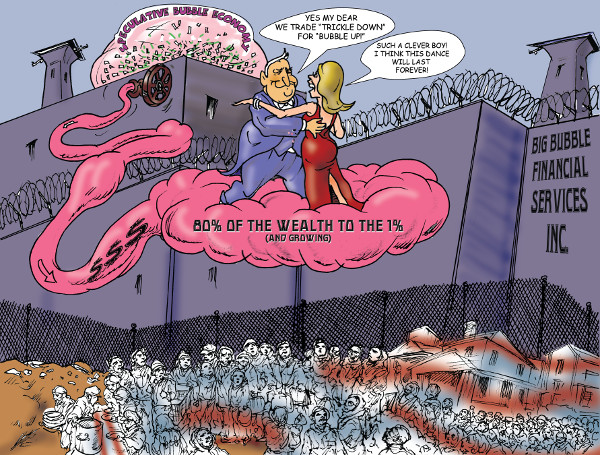 Oxfam reported recently that 80 ultra-wealthy individuals collectively hold the same amount of wealth as the world’s 3.6 billion poorest people. At the same time, the wealth of the world’s poorest 50 percent has fallen. Oxfam also noted that, if present trends continue, the richest 1 percent of people in the world will have more wealth than the remaining 99 percent by 2016.

Why is this happening, and what does it mean? And what is the solution?

The growing inequality of wealth is not simply the result of greed or corruption; it results from the introduction of electronic technology (computers and robots) into the process of producing the things we need. This technology began coming into the production process in a big way in the 1970s, and it has been steadily replacing human labor in production ever since, eliminating millions of jobs permanently and lowering wages for those still employed.

Under capitalism, the publicly necessary means of production—the factories, the banks, the mines, the offices, etc. —are privately owned by capitalists. Their goal is maximum profit, and they will not employ people to do something that can be done faster and cheaper by a machine. This means that this process of technology replacing labor will continue, and it will continue to create growing poverty among the workers as long as the means of production are privately owned.

We hear of various schemes to remedy the inequality of wealth by having the government redistribute wealth in some way, but this won’t solve the underlying problem, which is private ownership of the publicly necessary means of production.

If the people owned the means of production, we could simply make the things we needed and distribute them to people based on need, not money. No one would be poor, homeless or hungry, or do without health care. Labor-replacing technology is not the problem—it’s private ownership that’s in our way.

Getting rid of private property in the means of production is a long-term goal. To solve the immediate problems of poverty, the government must intervene in the economy to guarantee the basic necessities of life to all who need them. The capitalists who control the government will fight this effort of course, but the fight will allow the people to put the real issues on the table and force a public debate.

It makes no sense at all for one man—Bill Gates—to have a $76 billion fortune while 50 million Americans go hungry each month and millions are sleeping in the streets. The working class, employed and unemployed, is the vast majority, and we have the right to organize society in our interests.