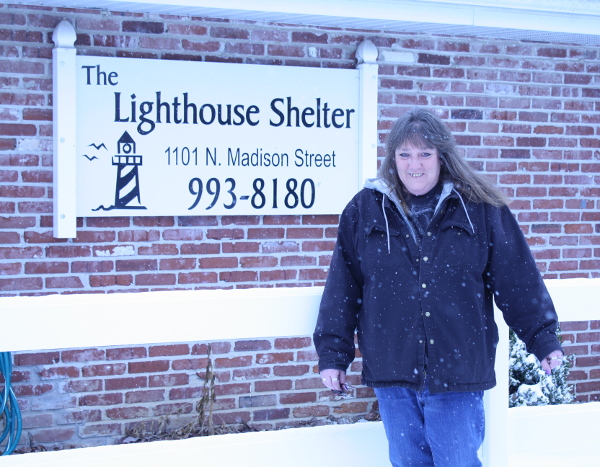 Tina Chappel, a homeless mother, says the solution to homelessness is for the government to provide housing and a basic income for those who cannot find work at a livable wage.
PHOTO/CATHY TALBOTT

People’s Tribune: When did you become homeless?
Tina Chappell: In 2011. After the kids’ father died in a car crash I went town to town looking for work. I had to go into the shelter system (you can only stay 30 days at each shelter) after my house was condemned and torn down. The kids were put into foster care.

PT: What is the job situation like in southern Illinois?
Tina: I’m 49 years old. Carbondale is a college town so I’m competing with college students for part-time, mostly minimum wage jobs. After three years, I still haven’t found stable employment. I’ve had to survive by panhandling. I did marry a man who was also homeless and we were able to survive this way. We made enough to pay for a motel room and eat for about a year. We still looked for work and got some day jobs.

PT: Carbondale is cracking down on panhandlers. What happened?
Tina: We weren’t bothered for about six months and then the city decided it needed to do something about its “vagrant” problem. Panhandlers were fined $75 even though we weren’t bothering anybody, just standing on corners with signs.  The $75 turns into $220 with court costs, etc. Then they decided that wasn’t high enough and now it’s $725. We got fined and also charged for trespassing while standing with our signs.

PT: Why did you stay in Carbondale?
Tina: We were going to leave for a place we heard treats the homeless better and tries to help them with housing and jobs. But my husband, who is an ex-offender, was given a 3-year sentence for retail theft. He needed cough syrup but we hadn’t been able to pay for it since the crackdown and when he offered to make restitution, they said no. Now I’m back out on the streets and going from shelter to shelter again.
PT: What happened to the others who were panhandling here?
Tina: One guy was arrested and had $4000 in fines. He was given the choice to leave the city or stay in jail. He left. Another woman had $1000 in fines and was allowed to leave.

PT: What happens to you if you can’t find a job and get permanent housing?
Tina: I have two weeks left at the shelter then back on the streets. If I panhandle I risk going to jail. There aren’t sufficient resources for the homeless and destitute.    And for those who’ve been incarcerated, it is doubly hard. But we are human beings trying to do the best we can under extremely difficult circumstances. We just want to live our lives with dignity. As humans we should have that basic right! There is a solution: the government should provide housing and a basic income for those who cannot find work at a livable wage.